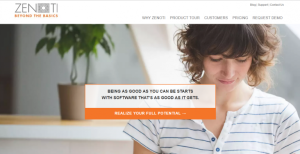 Zenoti has raised $15 million in a round led by Norwest Venture Partners, which co-founder and former spa-chain owner Dheeraj Koneru said will help the six-year-old Seattle company expand geographically and enter the fitness and yoga arena.

Zenoti is cloud-based software that helps salons, spas, medi-spas, yoga studios, wellness and fitness centers manage their day-to-day operations, and grow their business. Zenoti caters to the entire breadth of the wellness, beauty and fitness industry.

“Software is not looked at as an asset yet in the spa arena, and that’s one of the things we want to change,” said Koneru, who founded Zenoti with his brother, CEO Sudheer Koneru. “Wouldn’t it be great if customers could check in electronically, enjoy their spa experience, walk out without having to stop because their credit card will be debited, provide feedback and get a response? You’ll see that happening.”

Zenoti — the name is a takeoff from “Zen on the internet” — works primarily with health salons that have multiple locations, such as Gene Juarez and InSpa.

The company does about half its business in the U.S. and the other half primarily in Asia. The company plans to expand into Europe and other locations using the $15 million investment.

Zenoti –The Complete Cloud Software Solution for Spas and Salons