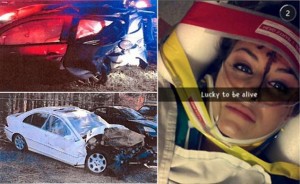 Sometimes, just sometimes people go nuts and do things which they aren’t suppose to do!
Same was the case with Christal McGee.

A Georgia man claims the car accident that left him with permanent brain damage was caused by a teen, too busy taking selfies to pay attention to the road, NBC News reports. Now he’s suing the teen, Christal McGee, and Snapchat. The lawsuit filed this month claims McGee was using Snapchat’s speed filter at the time of the crash last September.

Apparently, Snapchat awards a “trophy” after posting the speed using ‘Speed filter’. Lawyers for Wentworth Maynard say McGee, 18, admitted trying to get her Mercedes Benz up to 100 mph (that’s freaking 160.934 kmph) in order to post a photo using the speed filter. When she crashed into Maynard’s car, she was going about 107 mph — nearly double the speed limit.

When techcrunch reached out by email, a Snapchat spokesperson offered the following response. “No Snap is more important than someone’s safety. We actively discourage our community from using the speed filter while driving, including by displaying a ‘Do NOT Snap and Drive’ warning message in the app itself.”

Sincere request, No likes, comments, ‘hearts’ would replace your life!