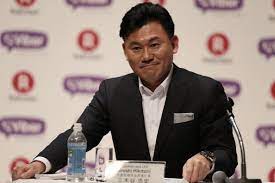 Hiroshi “Mickey” Mikitani, a Japanese businessman, announced on Sunday that he will donate $8.7 million to Ukraine’s government, calling Russia’s invasion “a challenge to democracy.”

In a letter to Ukraine’s President Volodymyr Zelensky, the founder of e-commerce giant Rakuten stated that the donation of 1 billion yen ($8.7 million) will go toward “humanitarian actions to help those in Ukraine who are victims of the violence.”

僕達にできることは本当に限られていますが、家族と相談し10億円をウクライナに寄付することにしました。
Consulting with my family, we Mikitani family have decided to donate 1 billion yen to Ukraine.
Attached is my letter to President Zaranskyy. Our hearts are with you. pic.twitter.com/w4LAPs7nt7

Major democracies have imposed sweeping financial sanctions in response to Russia’s invasion, while people and organisations around the world have requested money to assist Ukraine. The Japanese government has also imposed sanctions on Moscow, including the freezing of assets and the prohibition of essential exports such as semiconductors to Russian military-related organisations.

Speaking to reporters after a phone call with Zelenskiy, Japanese President Fumio Kishida said Japan will indeed put sanctions on Belarusian organisations and individuals, including President Alexander Lukashenko, and limit exports to Belarus due to the country’s “evident involvement” in Ukraine’s invasion.

Japan joins the West in attempting to limit the Russian central bank’s capacity to deploy $640 billion in foreign currency and gold reserves, as well as to disconnect Russia’s main banks from the SWIFT financial network, making it difficult for lenders and businesses to send and receive payments. Earlier, Japan’s top currency diplomat, Masato Kanda, stated that the government was collaborating with the other G7 nations to achieve effective economic sanctions against Russia and its central bank.

He was speaking following a meeting with counterparts from the Bank of Japan and the Financial Services Agency to examine the consequences from the Ukraine crisis, the first such gathering in nearly a year. On Monday, Japanese stocks slumped and the yen garnered demand as a safe haven currency after Western nations imposed further sanctions on Russia.