ABB Ltd an automation company has acquired a majority share in Numocity, an Indian based start-up company that provides energy delivery to electric vehicles across the nation.

ABB Ltd is a Swedish based automation firm that creates and sells robots, heavy machinery and equipment for various tech companies. The company recently saw the potential and future of electric vehicles and has decided to purchase 72% stake in Numocity. The company was founded 34 years ago back in 1988.

Numocity is a Bangalore based start-up company provides charging for electric cars, battery replacement and various other services for electric vehicles. The company was founded 4 years ago back in 2018. 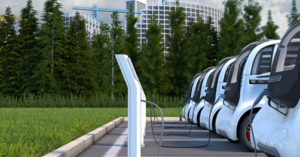 This deal that was finalised very recently marks the first ever non-Indian company to acquire a stake in an electric vehicle company in the country.

Chief executive officer of ABB’s e-vehicle subsidiary said that everyone in the company is excited with this deal as they look to expand in to the electric vehicle market especially in a booming country like India where the potential for electric vehicles is unparalleled. Automobiles without any emissions is a big goal that the Indian government is looking to attain to reduce their carbon footprint and ABB is happy to assist them in achieving this goal.

The two co-founders of Numocity, Mr. Ravikiran Annaswamy and Mr. Siddharth Sreenivasan said that the company’s work will be able to make electric vehicles become the mainstream mode of transport and with ABB’s investment, they can scale their worldwide all across the world and inculcate the importance electric vehicles to people around the world.

Electric vehicles have been making the rounds across news companies and social media platforms for almost a year now and the opinion on them have been very divisive. While many people argue that the technology used for electric vehicles are not suitable for the harsh weather India has to offer, almost every one can agree that zero emission vehicles are the way to go for the future.

The reputation that electric vehicles have been tarnished over the past few months due to many reports of them failing to work, the battery dying quickly and some of them even caught on fire. It’s a long road ahead for Numocity but with the government prioritizing the growth of electric automobiles, it shouldn’t be too long for them to be ubiquitous in the country.