Accenture to onboard 150,000 new hires using the metaverse

IT services consultant Accenture has announced that it will make 150,000 new hires who will work from the metaverse using VR headsets starting from their first day. The company has even created a virtual location called the Nth floor, where employees will socialise and participate in immersive learning experiences. Accenture is currently in the process of deploying 60,000 VR headsets in multiple countries. 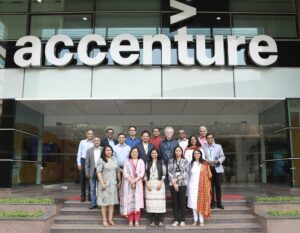 As a part of its aim to help transition its businesses using emerging technologies, the company has launched a Metaverse Continuum Group led by Paul Daugherty, the Group Chief Executive and Chief Technology Officer. The company started looking at new ways to collaborate and onboard after two years of the pandemic, while many employees continue to work remotely. Daugherty noted that he has held several meetings on the Nth floor already.

The Metaverse Continuum business will help introduce clients to metaverse learning and advance strategies, experiences and operations in the area. A recent report published by the company titled, ‘Meet in the Metaverse: The Continuum of Technology and Experience Reshaping Business’ stated that among 4,600 tech and business leaders, 71 per cent believe that the metaverse will have a positive impact on their company, and 42 per cent believe it will be transformational.

Accenture has 40 clients that are involved in the metaverse. Chocolate manufacturer Mars, for example, is partnering with Accenture and Microsoft to help digitise its supply chain by embracing the digital twins concept. Mars will now be able to make digital simulations of its product development process so that variable factors like climate and other disruptions are taken into consideration. Tata Consultancy Services (TCS) too has said it recruited 35,209 employees on a net basis in the quarter that ended March 31 this year which is the highest ever net addition in a quarter. In the past year, it hired  a total of 1,03,546 people which is also its highest till date. The total employee headcount is at 5,92,195. The company added one lakh freshers from campuses in FY22 against the stated target of 40,000. TCS further informed that it has set a similar target of 40,000 for FY23 as well.