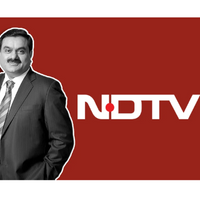 The group of billionaire Gautam Adani has found buyers for almost 53 lakh shares of NDTV despite the substantial discount to the stock’s current trading price, giving it the authority to name a chairman for the broadcaster, a prerogative it may or may not exercise.

According to a stock exchange statement, the open offer, made after Adani group purchased a little-known company, which gave it indirect control over 29.18% share in New Delhi Television (NDTV), closes on December 5.

The Adani group has received offers for 53.27 lakh shares compared to the offer to purchase 1.67 crore shares, or 26% of equity, from NDTV’s minority investors for Rs 294 each, according to information accessible on the National Stock Exchange (NSE) website.

Retail investors have provided just over 7 lakh shares, while corporate investors have offered the most at 39.34 lakh. According to NSE statistics, which do not identify the corporates or QIBs who have contributed to sell their shares, qualified institutional buyers (QIBs) had tendered 6.86 lakh shares.

The offer price of Rs 294 per share represents a significant reduction to the NDTV stock’s Friday closing price on the BSE of Rs 414.40.

The shares that have been tendered thus far represent 8.26% of NDTV. The ports-to-energy conglomerate would have a stake of 37.44 percent, more than the founders Prannoy Roy and Radhika Roy’s 32.26 percent holding when combined with the 29.18 percent stake Adani Group has previously purchased. Promoters owned 61.45% of NDTV before the hostile takeover by the Adani group. Included in this were the 1.88 billion shares, or 29.18 percent, that RRPR Holding Pvt Ltd owned. In addition, Adani Group inadvertently purchased RRPR Holding in August, which led to a broader open offer to buy an additional 26% of the media company. According to industry experts, Adani group is entitled to choose at least two directors, including the chairperson, to the firm’s board of directors as it is the largest stakeholder of NDTV. NDTV’s current chairman is Prannoy Roy, and his wife Radhika serves as an executive director.
Due to their 32.26 percent ownership, the Roys claimed they could continue serving as directors on the NDTV board.

The creator and wealthiest Asian in Asia, Gautam Adani, told the Financial Times last month that he plans to expand NDTV to become an international media conglomerate and has urged Prannoy to continue as chair.

LTS and FPI are the shareholders of NDTV

If Roy accepts Adani’s offer, he can stay on as chairman. But if he decides to step down, the Adani group will have the authority to designate a replacement. LTS Investment Fund, a Mauritius-based FPI with a 9.75 percent stake, is one of NDTV’s public shareholders. There is speculation that this FPI may have submitted a share tender or may submit a share tender in the open offer.

NDTV announced last week that Roys had left the RRPR board, but they remained on the NDTV board. As part of a larger diversification drive that has seen the conglomerate expand beyond coal mining and ports into airports, data centers, cement, and digital services, NDTV will give the Adani group a footprint in the media sector.

An interest-free loan of Rs. 403 crores was obtained by RRPR, or Radhika Roy Prannoy Roy Holdings Private Limited, in 2009 from a company associated with Reliance Industries. The debt was ultimately repaid by a privately held company named Vishvapradhan Commercial Pvt Ltd. (VCPL).

Two executivers were added to the RRPR board

With the loan’s aid, VCPL could convert warrants into RRPR Holdings shares, which had a 29.18% interest in NDTV. After acquiring VCPL in August, the Adani group sought to restore the contracts that resulted from the unpaid loans into equity.

The initial statement from NDTV claimed that the action was “done without any input from, communication with, or consent of” the company’s founders. However, the conversion was approved late last month, and Adani received 29.18% of the shares of NDTV.

Sudipta Bhattacharya and Sanjay Pugalia, two of Adani Group’s executives, were added to the RRPR board following the acquisition. In addition, Senthil Chengalvarayan, a journalist and independent director of Quintillion Business Media, a different media company in which Adani purchased a share earlier this year, was also added to the board. At the Adani group, Pugalia, a former journalist, serves as CEO and editor-in-chief of media projects.