Air New Zealand is set to introduce the world’s first economy first class bunk beds It would be called the Economy Skynest, and the beds would enable passengers to fly in comfort on a budget 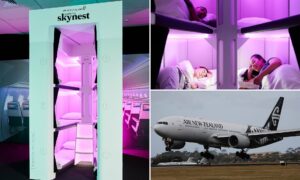 Air New Zealand is set to soon give economy passengers the privilege to access first class comfort at reasonable prices. From now on, they would be able to sleep in pods shaped in bunk bed-style seats on the flights. This is as it tries to attract passengers on its ultra long haul flights which are over 17 hours long.

According to the airline, these new cabins would be installed by the year 2024 and, premium and regular economy passengers would still have the option to buy regular seats that do not recline into a bed. However, they could opt to book four hour sessions in these lie-flat sleeping pods, for an additional charge, which is not yet finalised. Currently, the airline has decided to name this new addition Economy ‘Skynest.’

These bunk beds would have the provision with mattresses and sheets, which would be replaced by new ones by the cabin crew following every booking. Additionally, the pods would be placed on top of each other in order to adequately use the height of the cabin. Moreover, they would be equipped with charging outlets, a privacy curtain, along with ‘ventilation outlets.’

The layout of the these sleeping pods:

The installation of these bunk beds would require the removal of five economy seats to put six pods in place. This would be done across eight of the Boeing 787-9 Dreamliners that the airliners is supposed receive towards 2024 end. However, these would not be available for Air New Zealand’s launch of its direct flights in September from Auckland to New York, though it exceeds a duration of 17 hours. Additionally, it is set to resume its service from Auckland to Chicago in October.

A spokesperson from the airline stated that this would only be available to regular and premium economy passengers, who would only get one session in a pod per flight. This is as the airline expect the demand for the over 200 seats across the economy tier to be rather strong. They said that it would be limited to one passenger at a time, and that they are planning a booking system.

The CEO of the airline, Greg Foran pointed out how this addition would be a solid ‘game changer’ for economy travelling experience. He stated how the country’s location puts the nation in a rather ‘unique position’ to take a lead on travel experience in case of long flights. Foran added how they had ‘zeroed in on ‘sleep and comfort’ as the airline was aware of the importance of customers arriving ‘well-rested.’

“Whether they are heading straight into a meeting, or to their first holiday hotspot – they want to hit the ground running.”