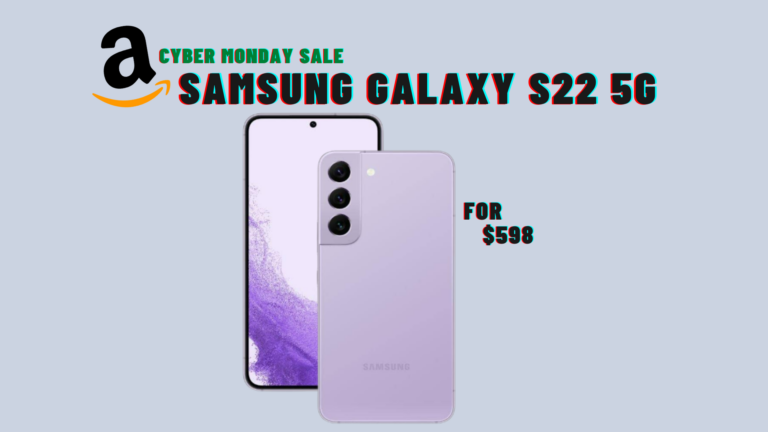 Samsung has you covered with an additional day to acquire their flagship device at a huge discount this holiday season. If you have been trying to get your hands on the latest flagship from this Korean smartphone powerhouse, we have an intriguing discount for you.

The Samsung Galaxy S22 5G is one of the most recent flagship smartphones, having been released in February 2022. However, there have been a growing number of indications floating regarding the successor model of this smartphone, and Samsung appears to be offering the best discounts in order to clear out the supplies for the current smartphone and make room for the upcoming Galaxy S series smartphone.

Samsung Galaxy S22 5G – What does it feature inside?

Before we get into the Cyber Monday offers you can get for this Samsung Galaxy S22 5G smartphone, let’s take a look at the specifications. On the front, you’ll notice a larger screen of up to 6.1 inches with a quicker refresh rate of 120Hz and a Dynamic AMOLED screen.

When it comes to the processor, this new smartphone features a specialized Qualcomm flagship called the Snapdragon 8 Gen 1, as well as compatibility with 5G. The processor in this smartphone has been limited to a maximum frequency of 2.99GHz. This chipset was also produced using 4NM processing.

Now, on the photography front, we get a 50 MP primary camera on the back, which is paired with 10MP and 12MP camera sensors, both of which feature Auto Focus. On the front, we’ll see a standard 10MP selfie camera.

If you’ve decided to get your hands on this new flagship, don’t wait any longer and take advantage of the late deals that are now available.

According to Amazon’s Cyber Monday Sale, this Samsung Galaxy S22 5G smartphone, which was formerly listed for $799, is now available for a price cut of $201, which is approximately 25% off its original price. The smartphone’s final price has been set at $598.

However, this discount is only for the base variant; if you need more storage, we have the 256GB variant, which is also getting a $100 price cut, bringing the total price down to $749.99 on Amazon.