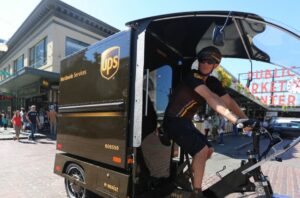 Amazon is reportedly set to launch a fleet e-cargo bikes and a group of on-foot delivery staff for the replacement of thousands of van deliveries on the streets of London. The e-commerce giant is coming up with its first ‘micromobility’ hub in Hackney, east London.

With the fleet of electric vehicle, the hub would contribute to about 5 million deliveries a year, mainly in the 10th of London’s ultra low emission area postcode districts. The e-cargo bikes would be handled by a range of partner business, and apparently not directly by Amazon.

The retain giant plans to introduce with more of these hubs around the country as an extension of its efforts to cut its carbon emission. Amazon was then named as the partner for a cargo bike, and on-foot delivery hub at London Wall car park, in the City of London in 2020. However, the project is yet to come into action.

The country manager of Amazon for UK, John Boumphrey stated how the company is moving towards a ‘global net zero carbon future.’ They stated how one way they are doing it by means of the transformation networks.

“Our new e-cargo bikes, walkers and growing electric vehicle delivery fleet will help us make more zero emission customer deliveries than ever before across London and the UK in the coming months.”

Hackney council cabinet member for environment and transport, Clir Mete Coban welcomed this new plan. He stated how dealing with ‘transport emissions’ is crucial if they plan to get to ‘net zero.’ He expressed his satisfaction with working with Amazon for supporting them to remove traditional vans from the roads, replacing them with e-cargo bikes.

This step from the e-commerce giant comes when window cleaners, beer and milk deliverers, DJs and plumbers use their bikes owing to new guidelines to facilitate the reduction of carbon footprint of businesses. Approximately, 2,000 cargo bikes were sold in the country in 2020 for commercial use. Specialist delivery services like Pedal Me and Velocious, have extensively expanded at the time of the pandemic. This was with the Zedify service, with 10 mini hubs on brownfield sites outside cities to facilitate thousand of zero emission deliveries.

According to Boumphrey, the company would install over 30,000 solar panels on its facilities across cities. Moreover, it confirmed 18 solar project in the sites already existing in the UK, and plans to multiply the project by 2024.