Amazon is limiting purchases of Plan B ‘morning after’ pills to 3 units a week This happens as the demand for it spikes following the overturn of the Roe vs. Wade rulinh 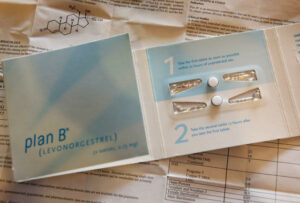 Amazon is limiting purchases of Plan B ‘morning after’ pills to 3 units a week during a rise in demand.
Source: Yahoo News

This week, Amazon.com Inc stated it is set to temporarily cap purchases of Plan B ‘morning after’ pill in the middle of demand rises. The retail giant confirmed limiting the purchasing of the emergency contraceptive to concerned authorities.

Reportedly, the company would currently on to reduce customers to getting only 3 of the ‘morning after’ pills every week in order to deal with intense shortages. Mainly, this was following the overturn of the Roe vs. Wade ruling by the US Supreme Court which went on to ban abortion in about 25 of the states in the US.

Amazon Inc goes onto join the ever increasing list of drug retailers establishing limitations this week on drugs such as over-the-counter contraceptives. Reporters received confirmations from Rite Aid and CVS that both of them would enable a maximum of 3 Plan B pills per customer. However, on Tuesday, June 28, CVS stated that it was ready to let go of purchase restrictions owing to the fact that their sales have gone back to normal this week.

Further developments on the situation:

Retailers such as Walgreen did not as such limit the number of Plan B pills that concerned customers can buy. A spokesperson from the company confirmed to reporters that they were still able to meet their in store demand of emergency contraceptive pills following the overturn of the ruling.

The decision from the US Supreme Court to overturn the Roe vs. Wade from 1973 has affected citizens’ right to abortion in the country in several parts. Essentially, this has given rise to various states coming up with laws that would either straight away ban the service or end up seriously limiting it.

Taking other ‘morning pills into account,’ the retail giant has not introduced such similar restrictions on generic versions of Plan B. Apparently, customers can buy a maximum of 30 units of another contraceptive called My Choice. The demand for contraceptives have clearly risen as people fear the results of the overturn of Roe v. Wade.

On Tuesday, June 28, a report from CNBC cited the Kaiser Family Foundation, and mentioned how emergency contraceptive pills such as Plan B are different drugs used for ‘medical abortion.’ Specifically, these call for the person to take 2 pills within a span 10 weeks of conception, and even  require a prescription.