AMC stock rose as much as 22% on Friday after the theater chain said that the latest “Spider-Man” movie set box office records for a December release. 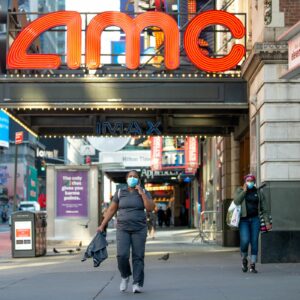 The movie theatre chain continues to ride high on its meme-stock fame with the stock up nearly 1,400% on the year.

The latest film in the iconic superhero franchise drove 1.1 million people to AMC theatres on its opening day – the single highest number of people watching one movie on one day at AMC’s US theatres during all of the calendar years 2020 and 2021.

AMC announced today that nearly 1.1 million people watched Spider-Man: No Way Home in theaters on its opening night. The movie has the second-highest advance ticket sales in the company’s history, behind only Avengers: Endgame, released in 2019. The film captures the highest December opening night ever for the movie company.

AMC CEO Adam Aron had some optimistic words about the blockbuster premiere. “Spider-Man clearly indicates to us that consumers in large numbers desire the experience that only AMC theaters can provide, and our amazing theater teams were prepared for the moment,” he said.

The opening narrowly fell short of “Avengers: Endgame”. Which was the best ever opening for the theater chain when it debuted in April 2019.

The record-setting release for the theater also comes as the new coronavirus variant poses headwinds to companies operating businesses reliant on customer foot traffic. AMC was among the group of companies hit hardest in the early days of the pandemic lockdowns. The Omicron variant is infecting an average of 140,000 people daily in the US over a seven-day period.

Spider-Man is certainly the start of the new movie momentum, but will it be the end? In short, it’s unclear. Marvel movies tend to stand head and shoulders above the competition when it comes to high-profile releases, but this premiere had even more going for it than usual.

AMC offered premium moviegoers non-fungible tokens (NFTs) for early purchases of Dec. 16 showtimes. A series of conditions had to be met to redeem the 86,000 NFTs given. However, this first-of-its-kind offering from the company was sure to grab headlines. And it’s not the last of its kind. AMC is offering a series of daily challenges leading up to the release of the new Matrix Resurrections film, with the reward being — you guessed it — NFTs.

Despite movies increasingly receiving both theatrical and digital releases through streaming services. AMC saw revenues increase in 2021 as Covid-19 vaccines rolled out across the US and restrictions lifted. Through the first nine months of the year ended 30 September, AMC’s revenue is up 25.6% year over year.