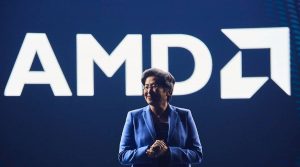 AMD has been a household name in technological niche for a considerable amount of time now. AMD or Advanced Micro Devices is an American multinational semiconductor company from Santa Clara, California. They are well known for their top class chipsets and processors used mainly in PCs and Laptops. The Ryzen range which was introduced made the company a real competitor in the game. It was surprising that many reviewers even placed AMD’s chips higher than Intel’s in their rankings, but we will get to that later. Let’s talk about the biggest fish AMD has ever caught.

AMD has grown exponentially since the range and usage of microchips has gained momentum. The consumer satisfaction and product quality which the company provided quickly boosted its image. Due to all that and some other benefitting factors, AMD just landed Elon Musk’s Tesla. Tesla cars are an impeccable combination of hardware and software inside automobiles. The infotainment systems used in the Tesla cars are better than many mid-range tablets available in the market and now these just got another upgrade, AMD. AMD’s chips will now be powering the infotainment systems of Tesla’s model S and model X as announced on Monday at the Computex computer show in Taiwan.

AMD and Intel’s rivalry is now taking a swift turn. In the last year AMD’s stocks rose by a whopping 52% and Intel’s stocks have gone down by 10%. Even considering the Tesla deal which recently took place, AMD has gained the edge. Intel chips were used to power the model X and model S before but now AMD has that job. Intel is left with the lower models of Y and 3.

AMD has made such advancements in the field of manufacturing of microchips that they are now recognized as a pioneer name in the game now. The infotainment systems which will be powered by the AMD chips have shown a staggering 15% improvement in handling graphic heavy and intense application including several games. Both companies, Tesla and AMD, have said that these heavy entertainment applications won’t be available for use when the car was being driven. Other than that the basic applications for example song players, navigation, and voice talk-back etc. are working flawlessly.

AMD has attributed this unreal improvement in performance to their new three dimensional designs. Instead of grouping the chips together, the chips are stacked together which make room for better performance, more power but also less battery consumption. These chips will definitely last a lot longer but you do have to pay a price for it as these new chipsets are only available for the high-end merchandises which are powered by AMD.