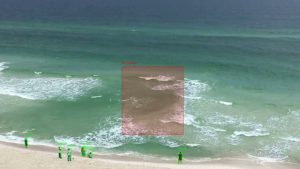 Rip currents are a major reason for life lost every year. Around a hundred beachgoers are killed every year in the US due to these killer waves. The fact that they are hard to predict or for that matter identify distinctly adds to the threat. Because when you know the enemy, it is more convenient to fight than when you are blindfolded. If not experienced with these rips, it’s not easy to identify them, and one moment of carelessness can result in a huge loss. Also, more often than not people are clueless as to avoiding and surviving a rip current.

This is when Ricardo Santano decided to take the matter into his own hands and come up with a solution that can remarkably bring down the mortality rates. Santana is passionate about surfing and holds a degree in aerospace engineering.

Santana’s experience with surfing and the beach made him see closely the gravity of the situation and about the frequency at which rip currents cause hazards to people. This also brought to light the lack of awareness on the part of general public about rip currents and the danger posed by them. Rip currents do not have a consistent shape which makes it all the harder to spot them, particularly when the person is not trained in the field.

AI to the rescue

Recently, Santano was intrigued by artificial intelligence and self-studying machine learning and computer vision in particular. By blending together with this interest and his experience he channeled his efforts towards the development of a deep learning project with the ability to facilitate the detection of hazards using a single camera.

The main working idea behind the project was to use cameras that faced the sea from the top, in addition to an artificial intelligence system that could recognize the rips. This had the potential to prevent hazardous situations and even save lives.

Santano used a deep learning model to tackle this problem. A series of positive and negative samples of rip current images were fed into the system and it was trained based on these. The result was that the system reached a capability wherein it could effectively predict the right features to facilitate the classification and location of rip currents in a given image. The main objective behind the system is to predict potentially harmful and life-threatening situations in advance, thereby helping to save the lives of a large number of people.

Santana is still working on the model, adding extra features that could enhance the reliability and precision of the technology which has the potential to be a groundbreaking one that could ensure the safety and security of people.