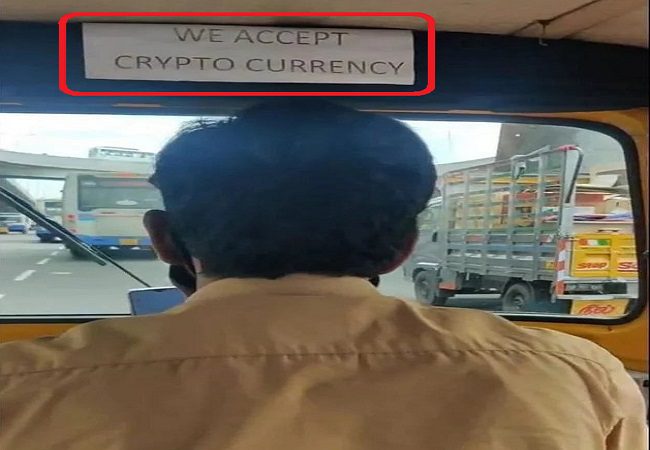 An autorickshaw accepting cryptocurrency is the talk of the town now.

Cryptocurrency is gradually gaining prominence world-wide. With famous personalities like Elon Musk backing it, crypto is on its way to assume the top position. Although, there is a pinch of skeptisim prevalent in the discussions concerning crypto, it does not stop people from investing in the same. This is despite the fact that their hearts too fall everytime the graph fall, which is more frequent than expected. What keeps people in check is the assumption that crypto is essentially a long-term investment. And who knows? Perhaps this patience in connection with crypto will actually pay off, literally.

Crypto becomes the talk of town very often. However, today what has brought it to the spotlight is a baffling situation. Because an autodriver is apparently all for crypto and is even accepting fare in cryptocurrency. No, it is not an April Fool joke, because we are way past April. Does this mean that crypto has gotten so popular that even an auto driver is ready to accept payment in crypto. We are indeed living in strange times. Ever since the picture started making its rounds on the internet, netizens couldn’t hide their confudion and surprise. And should we even talk about the tweets. It has been flowing from all directions! 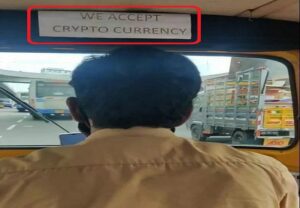 Netizens are still in indecision about the situation. It is not yet clear whether this was the auto-driver’s idea of a joke or if he actually was every bit serious. And whteher he knows anything about cryptocurrency is another question altogether. Since speculations are still underway, suit yourself and choose what you would like to believe. If you are a crypto enthusisast, take up the optimistic road and revel in the popularity of crypto that seems to have touched even the corners of the world. If you are a skeptic like me, well, be skeptical.

Cryptocurrency in itself is usually a source of memes andd jokes. It will not be an exaggeration to say that the literal ups and downs of crypto has sharpened the sarcasm level of netizens to a great extent. And with the autodriver accepting fare in crypto, the sarcasm levels have gone up. After all, confusion and bafflement are two points that inspire a good amount of sarcasm. Let us take a look at the various responses on Twitter as the picture made its rounds on the internet.

Perhaps the man is really fed up of customers not paying in cash. As they say, “desperate times call for desperate measures.”

Cannot help but wonder if he is from the future.

You never know what the future has in store. Maybe, the autodriver is really prudent. If not foresight, what else is this? (Cluelessness?)

It is all a matter of perspective my friend.