Crypto payments have been introduced by a bar frequented by local anarchists in Brussels. It’s Bitcoin that’s going to rule the future, say the owners, who have recently renovated the building. The establishment was among the first in the Belgian capital to take coins for pints, according to reports.

Brussels’ downtown Dolle Mol café and bar, which offers beverages in cryptocurrencies, has started offering them to its customers. Owners of one of Belgium’s most famous anarchist bars claim their establishment is one of the first of its kind to support crypto payment methods. 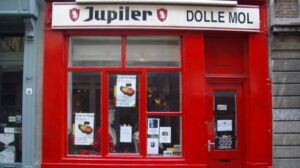 A group of young Brussels residents renovated the bar in the past two years. Grégoire, one of the owners, said the cafe must adapt to the times, according to the Bulletin, a Belgian English-language news portal. Described how he responded to the decision to accept digital coin payments:

“The future of money is a cryptocurrency like bitcoin. With this new method, everyone can purchase a pint.”

Despite introducing the service recently, the owner acknowledges that there have not been any cryptocurrency payments yet. Users won’t learn about cryptos until some time has passed. Grégoire told the Bulletin that people don’t fully grasp the repercussions of the shutdown. The sticker on the door clarifies that otherwise, it doesn’t say much. The idea has echoes of the internet in the 1990s,” the entrepreneur explained.

The publication notes that Belgian and Belgian cryptocurrency regulations still remain unclear. Consequently, Grégoire believes that there are no clear, watertight regulations. It keeps things simple and safe, which is why we have a bar.

A QR code is an easy way to pay with bitcoin, say, for a pint at the bar. In addition, the Belgian explained, we would put that money in our personal bank account, which we then would leave in the cash register.

The EU has yet to regulate crypto payments. Europe’s fintech sector will be determined by the announcement of a new digital finance package last year from the European Commission.

Among the elements of it is a new legislative proposal known as Markets in Crypto-Assets (MiCA), which is aimed at introducing regulations for digital currencies and crypto service providers. Moreover, the European Union may ban anonymous crypto wallets if it amends its anti-money laundering directive.