The first major sports franchise to allow Dogecoin (CRYPTO: DOGE) purchases will offer a promotion to online shoppers who use the meme cryptocurrency or other cryptocurrencies. Dallas Mavericks customers using cryptocurrency to receive free gift cards

The “Mavs Cryptomania” giveaway is the NBA team’s newest effort to promote cryptocurrencies. The team added dogecoin to its list of acceptable currency for ticket and product payments earlier this year. Customers who spend at least $150 on items with specific cryptocurrencies will receive a $25 e-gift card from the Dallas Mavericks.

Mark Cuban, the owner of the Dallas Mavericks, is an outspoken promoter of Dogecoin. In March, the Mavericks started accepting Dogecoin as a means of payment, and they’ve also accepted other cryptocurrencies for retail and ticket purchases. 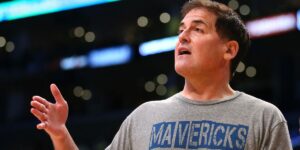 “You know you want to, Mavs.com is ready for you. It’s #Dogemania !” Cuban tweeted. From August 13 until September 20, the Mavericks are running a Cryptomania promotion. If you spend $150 or more on the Dallas Mavericks online store using bitcoin, you’ll receive a $25 gift card.

Purchases must be completed in one transaction and total $150 before taxes and shipping. The gift card will be sent within 5 to 7 business days and has a 12/31/21 expiration date. The Mavericks website must be utilized to redeem the e-gift card.
A user was assured by Cuban that purchasing tickets on the website also qualified them for the deal.

The Doge community reacted positively to Cuban’s post, with two of the crypto’s most well-known advocates responding. “I just used Dogecoin to purchase a doge-colored @dallasmavs basketball. Much adulation! “Thank you, @mcuban!” greg16676935420 sent out a tweet. Greg is a well-known Dogecoin fan who has been dubbed the crypto’s unofficial CEO by Twitter users.

Greg received a retweet from Cuban, who said, “Thanks Legend.”
The fact that Cuban and the Mavericks were early supporters of Dogecoin wasn’t lost on Dogecoin co-founder Billy Markus. Markus tweeted, “If you want to support one of the first big-name vendors to evangelize DOGE for purchases, it’s ready for you,” as @mcuban put it.

In March, the Mavericks began accepting Dogecoin for purchases, and in April, Cuban stated that sales of the joke cryptocurrency had increased by 550 percent and were breaking daily records.

BitPay is also used by the Mavericks to accept other cryptocurrencies such as Bitcoin (CRYPTO: BTC) and Ethereum (CRYPTO: ETH).

If you found this article informative then please do not forget to share it with your friends and family! Also, share your thoughts with us in the comment box down.