Robotics is now being used for more and more sectors. They are mostly used to perform tasks which the humans might find too tiresome or hazardous to perform. Robots are also proven to be useful because of their little to no error making capability, something which the humans are not capable of, on a large scale.

A Swiss robotics company ANYbotics has now announced to launch a new end-to-end robotic inspection system for the energy and industrial processing arenas. This robotic inspection system has been developed due to the dangerous work environments which the employees face in this area. This system could be used to lower the downtime and will be able to improve the safety conditions on the production sites.

There are many challenges to be faced, even for the robots in this sector. The sectors for energy, construction and processing spaces have always been quite difficult for the wheeled robots to navigate. Keeping this in mind, the company developed a quadruped robot ‘ANYmal’.

The robot ANYmal uses inspection analytics software. This software is capable of automating the process of routine condition monitoring of the entire infrastructure and the equipment. Being quadruped the robot ANYmal can be considered helpful in the settings which are hard to navigate for the other robots. The robots limbs make it capable to navigate the tight spaces in a much better way and also to go up and down the steep stairs present at many such sites.

The gap between technology developed and the demand from the industries regarding safety and production demands has been constantly increasing. The work conditions in such sectors can be proved to be very dangerous for the humans and might even have adverse health effects on the workers. Keeping all this in mind, a robot which is capable to conduct all such activities can be considered to be a very good alternative. 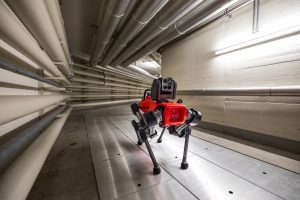 ANYmal robot makes it way around a facility autonomously with the help of a depth camera
Image Credits: ANYbotics

So far the Swiss company, ANYbotics has introduced this new end-to-end robotic inspection system for a few new customers only. This was done in order to test how this system works for such facilities.

For this automated robotic equipment and site inspection actual implementation process can be proved to be a big obstacle. For the system to function and to properly assess equipment and efficiency for each unique site, that particular site must first wholly integrate the technology into its infrastructure. That particular site must also streamline the robot ANYmal’s operations into routine site operations.

The ANYmal robot is capable for both day and night operations. Once the robot is fully charged it can work for the time period of 90 minutes. The robot is also capable to returning to a strategically placed docking station upon detecting that its batteries have started to run low and in order to recharge itself.