The American tech giant Apple could soon be the first U.S. company to reach a market capitalization of 3 trillion dollars just over a year after it surpassed two trillion dollars.

Apple became the world’s most valuable business thanks to a steady stream of products that have captivated consumers. Now, with markets wobbling because of concern that higher interest rates and the coronavirus will undermine economic growth. Investors view the company as a relatively safe place to park their money thanks to its consistent sales growth and hefty cash balance. 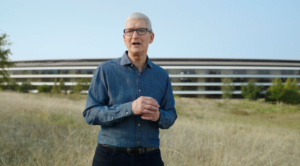 The shares of Apple were up 1.6% at $174. They need to trade at $182.85 to hit the mark and cap a strong rally that has been powered by investors betting on its brand and viewing it as a comparative haven. To hit three trillion, it needs to rise less than 4-and-a-half percent more.

Since the end of the 1990s, Apple shares have returned a whopping 22 000%, equal to about 28%/year. The S&P 500 has returned 7.5% annually in the same period. A few other tech stocks have done better — Nvidia, a maker of graphics processing chips, has returned 31% annually. While streaming giant Netflix is up 39%/year since its 2002 initial public offering — but Apple dwarfs them both in size.

The iPhone maker jumped 3.5% to $171.18 on Tuesday to lead the advance in the Nasdaq 100 and S&P 500 stock indexes. The Cupertino, California-based company trades at 30 times profit projected over the next 12 months, compared with an average of 22 times for companies in the S&P 500.

“Apple does seem to be more immune to the ebb and flow of economic forces just because of this really strong brand. Its new product pipeline is pretty strong too,” Susannah Streeter, senior investment and markets analyst at Hargreaves Lansdown said.

“There is an expectation that Apple is still going to come for you even though there have been some weaknesses in getting hold of the handsets and making sure that they’re available for the public.”

In January Hyundai and Kia were linked to a possible deal to help Apple build its car. But the collaboration seemed to fall apart after the automakers let word slip of the team-up.

That doesn’t mean Apple gave up on its effort, with the company pushing forward with its plans on its own for now. It’s still unclear when we’ll see an Apple Car, with potential timelines ranging from five to 10 years.

Then there’s Apple’s AR/VR headset and glasses. The company is reportedly preparing to put out a version of its headset sometime in 2022, with a pair of glasses coming sometime later.

Now investors can’t get enough of the stock. In a sign that mom-and-pop traders are chasing Apple, short-term bullish call options saw extreme buying activity. Four of the 10 most-active options contracts on US exchanges on Tuesday were calls on the iPhone maker.