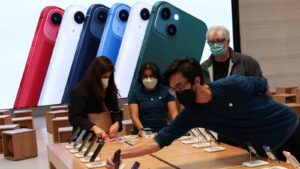 Reports suggest that Apple Inc is currently set to face a new lawsuit in the UK that could possibly seek hundreds of millions of pounds as compensation for iPhone users. This was following accusations against Apple of having misled customers on a rather controversial power management tool.

A market researcher, Justin Gutmann, has reportedly applied to the Competition Appeal Tribunal to approve of bringing about a collective action on behalf of iPhone users in the UK. This was revealed in a statement from Thursday, June 16, further disclosing that the suit could include as much as 25 million people. Mainly, these are the ones who purchased models of Apple’s iPhones from 6 to the X if proven successful.

The lawsuit essentially alleges that the iPhone maker abused its dominant position in the market by letting users believe that software updates from late 2016 aided the battery life of the iPhones. However, it is quite clear that the updates quietly ‘throttled’ the battery lives of the mentioned devices.

Gutmann stated how the iPhone makers managed to hide a power management tool in its updates to conceal a crucial factor about the batteries. It managed to hide the iPhone batteries would not be able to handle the processing demands of the new software, ultimately causing frequent shutdowns and glitches.

“We have never — and would never — do anything to intentionally shorten the life of any Apple product, or degrade the user experience to drive customer upgrades,”

A spokesperson from the tech company specified how Apple ‘would never do anything’ to purposely shorten the life of any of its products, or even affect user experience in order to push them to upgrade their models. The collective action would require an approval from the CAT for it to progress. Though the amount of compensation is not yet determined, Gutmann, along with his attorneys estimate that the entire compensation could be possibly about £768 million ($927 million).

Apple has been sued a number of times in Europe over the throttling problem of the iPhone. In Italy, a class-action lawsuit was filed in January 2021, seeking about $73 million in compensation for owners of the iPhone 6 series’ models sold from 2014 to 2020.

Similarly, such lawsuits were filed earlier in Belgium and Spain. Moreover, Apple paid about $500 million in the US market in 2020 to end a number of lawsuits. These suits accused the tech giant of slowing down some of its older iPhone models with its software updates.