Apple turns monitor height adjustment stand into an upsell The $400 upsell could be considered a bargain taking into account, Apple's standards 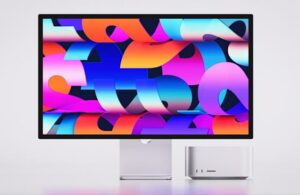 This week, Apple uncovered the new $1599 Studio Display, which is a standalone monitor launching this month. Surprisingly, it comes with a VESA wall mount adaptor or tilt-adjustable stand. The choice between these two would totally depend on the customer’s preference. What Apple is offering with $400 more is the choice for the customer to opt for a fancier version. With the extra $400, one could purchase an upgraded version of the stand that would allow a more innovative tilt and height adjustment.

In the world of Apple, many are considering this deal of just shy of $2000 a steal. A whole set of a 5K retina display monitor, along with a stand looks like a perfect target for the consumer market. However, experts are further warning customers who are inclined towards non-reflective surfaces. They would have to put an addition of $300 in case they want to purchase the Studio Display’s nano-textured glass. In fact, even hardcore fans of Apple resisted from the Pro Display XDR which Apple launched in 2019. The monitor started from the whopping price of $4,999 which did not even include the optional stand worth $999.

Back then, they referred to the smooth, elegantly designed accessory as “an expensive gadget no one needs.”

Many noticed that owing to the sort of conditioning Apple customers have, they would consider the deal of the stand a bargain . However, when viewed from a practically perspective, it does not come across as a good deal at all. This is because of the simple fact that it costs $400, which is the same as the Apple Watch Series 7 or the new iPad of 128GB storage. One could make a better purchase with the $400 than the metal stand.

On the bright side, for customers who would rather not choose to buy the stand worth $400, they already have an advantage. The stand that already comes with the Studio Display is still tilt-adjustable to a considerable extent. If one would like to save some space on their desk, mounting the monitor could be good option too. However, the height-adjustable metal stand is non-negotiable for customers who are in need of it. Customers who are essentially using a standing desk or wrestle with eye strain could really benefit from it.

Another relative deal comes along the way of Apple enthusiasts, although they are still recovering from the shock of the $400 metal stand. The wheels for the new Apple Mac Pro costs $699, which is a solid $299 more than Studio Display stand.