It doesn’t come across as a big surprise that robots are highly efficient and can be used to perform tasks deemed to be difficult for humans. They are an excellent substitute for assistance as well as supervision. Many researchers and engineers are putting in efforts daily to discover new things that the Robotics field has to offer. With that being said many industries are now keen on unveiling newer and better robots and are deploying them in a never before terrains.

Most of the robots which are developed for such purposes are born out of inspiration derived from nature. Their build and mechanism is similar to those animals found in that particular terrain. Such robots have demonstrated the ability to access areas which were considered to be completely inaccessible for humans because of the environmental condition or due to the route being too dangerous.

Now, a team of Italian researchers have developed a new robot which is capable of walking on the seabed. These researchers are from the BioRobotics Institute, Scuola Superiore Sant’Anna and Stazione Zoologica Anton Dohrn. They have introduced a newer and improved version of this robot.

The name of this robot is SILVER, it stands for Seabed Interaction Legged Vehicle for Exploration and Research. The updated version is named as SILVER 2. This Robot is not only capable of walking on the seabed but it also records a video as it moves around. The research team has further explained the robots capabilities and how useful it can turn out to be in research efforts, in detail in a paper published in a journal ‘Science Robotics’. 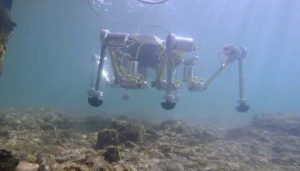 The robot SILVER 2 has already undergone various tests under different environmental conditions. It has been tested to walk on seabed among billowing seaweed, mud, rocks and sand and has been put in these conditions under varying currents. During the tests it was found out that SILVER 2 was being remarkably quiet while walking on seabed underwater. This allowed the robot to capture videos of sea creatures in their natural habitat without being affected by its presence.

The SILVER 2 robot can be operated in two ways. One way is that, it can be controlled by a human pilot on a boat while it is being driven across the seabed. If not, the robot is also capable of operating in a fully autonomous mode. This robot can function for seven hours approximately when it is moving around the sea bed and if it is standing still on the seabed it will be able to last for 16 hours.

The team of researchers believes that this robot can be used for various purposes ranging from ecology to archaeology due to its capacity to function underwater. This Robot according to the researchers can be used to examine and interact closely and delicately with the environment for an extended period of time.

The robot SILVER 2 is built to look similar to a lobster, without the claws. It is capable of walking across both muddy and rocky surfaces and is even capable of hopping over an obstacle and keeps moving. This Robot makes use of a leg stabilising module which is fit in its waterproof body shell in order to maintain its balance while moving around the seabed. This Robot is also equipped with a navigation system which allows it to reach the destination and to also avoid obstacles in the journey.