Watch: A Robot Guide for the Blind Equipped with a Leash Guided Assistance

The world of technology never sleeps. Day after day we see newer and better technologies being launched with an ultimate goal of making things simpler and easier for the humans. Robots are now being used for various purposes and are being developed specifically to assist humans. A team of researchers at the University of California, Berkeley has now developed a robot dog. This Robot dog will be able to assist its visually impaired users in a similar way like that of a real guide dog.

The researchers have uploaded two videos on YouTube which shows this robot dog demonstrating its capabilities. They have also written a paper describing the features and capabilities of their robot guide dog. This paper is uploaded on the arXiv preprint server.

After testing this robot it was found that this robot dog was capable of leading a blind person (a blindfolded person with sight had participated in this test) safely from one point to the other. It can be done both with a tout and a slack leash.

Guide dogs can be extremely useful for those who are visually impaired or are suffering from a low sight. But there are many challenges which the owner must face before and after getting the guide dog. A lot of time and money is involved while training the guide dog. This leads to many people being put on long waiting lists while some are not able to afford one at all.

In another case, the researchers at the University of California, Berkeley’s Hybrid Robotics Group have developed a quadrupedal robot with a leash that is capable to perform all the tasks usually carried out by a guide dog and will also be able to provide additional services to its users. This robot dog can be used by visually impaired people or by those who are suffering from a low sight in order to navigate safely in the indoor environment without them crashing into windows, walls and any other obstacles.

This study was carried out by Zhongyu Li who is a researcher at the UC Berkeley’s Hybrid Robotics Group. He said, “A well-behaved guide dog usually needs to be selected and trained individually. In addition, the skills from one dog cannot be transferred to another one. This makes training guide dogs both time consuming and labor intensive, and the process not being easily scalable. On the contrary, the algorithms developed on one robotic guide dog can be easily deployed to another robot.” 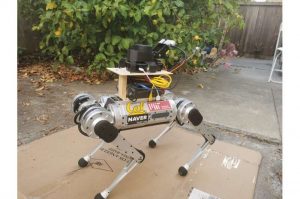 Quadrupedal robots are considered to be ideal substitutes for guide dogs as they resemble them both in shape and size. These robots with four legs are found to be getting more and more sophisticated after each update. Along with this such robots have also become more affordable and are proved to be easier to fabricate on a large scale.

Zhongyu Li said, “We decided to pursue the use of quadrupedal robots as guide dogs for visually impaired people. Our guide dog is based on a small quadrupedal robot called the Mini Cheetah, equipped with a 2D LiDAR to sense the environment, a camera on a gimbal to track the position of the human being led, a leash to guide people and a force sensor on the leash to measure the force being applied by the human / on the human.”