Earlier Nigerian cryptocurrency users were furious in February after the Central Bank of Nigeria imposed limitations on cryptocurrency-related transactions for Nigerian banks. No banks were to facilitate the purchase or trade of digital currencies, according to a circular, and any individual accounts found doing so were to be suspended and notified.

Following this news, exchanges including Binance and Luno sent out announcements to their Nigerian users confirming the suspension of cryptocurrency withdrawals and deposits on their platforms. As a result of these developments, we’re beginning to wonder if any jurisdiction can effectively outlaw Crypto. 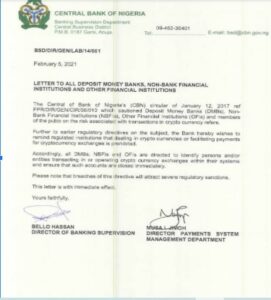 What is the Purpose of the Restrictions?

Many Cryptocurrency users in Nigeria were taken aback by this prohibition. Bitcoin, in particular, has been on a tear in the months leading up to the announcement, reaching a new all-time high of almost $60,000 and attracting more institutional backing than ever before. Why would the CBN try to limit its use, especially because Nigeria is one of the world’s largest Crypto markets?

Following that, Nigerian government officials expressed alarm about the potential use of cryptocurrency for criminal and terrorist purposes. This is a typical reply to Crypto detractors who suggest that using Crypto will make illegal actions easier.

Some Nigerians believe the Crypto ban was enacted to avoid future anti-government and anti-police brutality protests like the #EndSARS protests in 2020, which saw demonstrators’ bank accounts frozen and crowdfunding conducted using Cryptocurrencies.

While the CBN later emphasized that its action was not an outright prohibition, it had already caused significant damage to the developing Crypto economy.

Attempts to stop Cryptocurrency are never-ending.

Over the years, a number of countries have attempted to restrict the usage of cryptocurrency. China, for example, has prohibited banking institutions from supporting Cryptocurrency transactions, while Nepal has proclaimed Cryptocurrency to be illegal. In India, the Reserve Bank of India imposed a ban, however, it was overturned in 2020.

Bans and severe restrictions on bitcoin are less likely as it becomes a more natural and accepted part of the global financial ecosystem.

Can any country, on the other hand, successfully and permanently ban cryptocurrency?

The answer is no, to put it another way. Cryptocurrencies are not in the best interests of international governments; as many Crypto experts and entrepreneurs have pointed out, they are not a currency issued by a central bank and hence cannot be easily controlled by governments. The reason why many governments throughout the world have been slow to recognize or control Cryptocurrencies for a long time, fearing that their presence will jeopardize their authority.

This is also why attempts to criminalize cryptocurrency have been made, albeit none have been successful in the long run. This is due to the fact that cryptocurrency, at its core, allows for great degrees of privacy and is not governed by any large institution.

No one can know where or to whom tokens are delivered except for wallet addresses, which are a combination of numbers and letters.

Cryptocurrency exchanges are closely regulated by regulatory organizations due to KYC requirements, but when exchanges are locked down, consumers just relocate to peer-to-peer trading. Nigerians, for example, began trading peer to peer in large numbers in the weeks following the CBN’s crypto ban.

A similar situation occurred in India. Crypto enthusiasts flocked to major Cryptocurrency exchange WazirX, which established a peer-to-peer system barely two days after the RBI’s shadowban on Cryptocurrencies was declared. By connecting suppliers and buyers directly, financial institutions were no longer required.

Meanwhile, citizens in China have been known to use virtual private networks (VPNs) to avoid government repression.