ARK Invest’s Cathie Wood strongly believes that the cryptocurrencies will boom in the global market.

The connection between ARK and Bitcoin!

ARK as an institution, truly trusts that crypto currencies managed by open-source networks will enable a new model for the fiscal systems to store and transfer value. The institution also believes that the cryptocurrency value and market dynamics will be “Power Law Distributed” which implies that only a few of the crypto currencies will rule the market. After the emergence of Bitcoin, ARK observed, a battle among different monetary systems both sovereign and non-sovereign. They also claim that, this battle can be won by the cryptocurrencies that are neutral in nature. 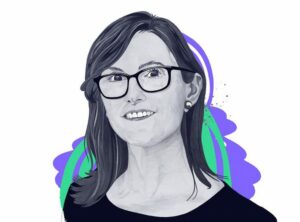 ARK Investment Management led by Cathie Wood, predicts that the value of Bitcoin will exceed a mountain of $1Million by 2030. ARK feels that, cryptocurrencies are turning out to be a factor that can take the financial aspect of the business to the next level. They feel that cryptocurrencies will surely takeover the global settlement network in the near future. To support their statement, they also made research. The research indicates that the bitcoin’s cumulative transfer volume increased by 463% in 2021. It also showed that the annual settlement volume of cryptocurrencies was more in comparison to that of visa’s annual settlement volume.

The End of Bear Market!

As Cathie Wood feels that cryptocurrencies will take over the global settlement network, she also predicts that the bear market of crypto is nearing an end. She believes that, bitcoin has been reached its lowest value, and the increasing co relation between crypto and traditional assets directs to an end of the bear market. She also told that, Bitcoin reached its lowest value and this will be a temporary phenomenon.

What does the future for major Crypto Currencies like Bitcoin look like? Let’s see what Cathie Wood feels!

According to Cathie Wood, blockchain is one of a group of industries that has the potential to grow exponentially. She expects these industries to grow 21 times in the next seven to eight years.

What should our expectations be from Crypto?

If analysts were to be believed, the global crypto currency market share will be more than triple by 2030 to what it is now. The valuation will reach approximately $5 Billion. Whether investors, businesses and brands take part in trading or not, this surge cannot be left ignored.