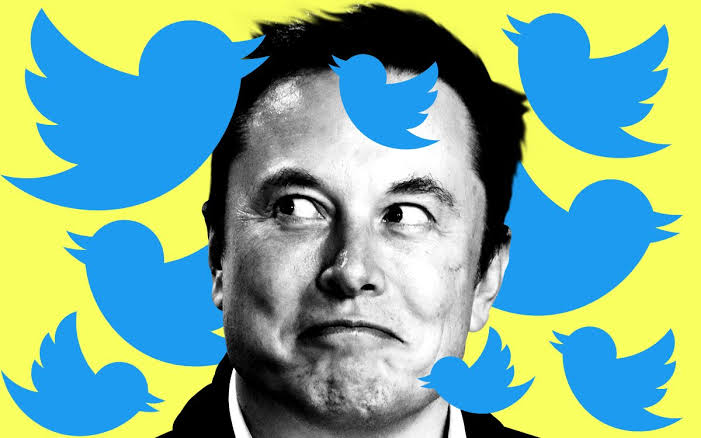 Elon Musk says ‘Twitter has strong left wing bias.’ This was in response to a reporter’s tweet calling violence against anti-abortion groups.

On Monday, May 9, Tesla CEO Elon Musk took to Twitter saying the social media platform has ‘strong left wing bias.’ This was in reply to a tweet from a reporter calling violence against anti-abortion groups. His response was to a post from one Mike Cernovich who is a conspiracy theorist. He is known for the propagation of one baseless theory, the Pizzagate theory about how high ranking democrats were possibly behind a functioning pedophiliac sex trafficking ring from a pizza shop in D.C.

In this initial tweet, Cernovich mentioned the billionaire CEO alleging that the platform is visibly permitting verified pages to incite aggression for apparent ‘liberal causes.’ The theorist tagged Musk in a tweet on Sunday, May 8

‘Here you go @elonmusk, when Twitter employees invariably lie to you about enforcement policy, maybe they can explain why a verified account is allowed to incite terrorism without any care in the world about being banned.’
Cernovich went on to retweet from Rewire News Group reporter Caroline Reilly. Reportedly, she encouraged hostility against anti-abortionists in a tweet after the breaking of a news of a burning and attempted bombing at an office of a pro-life group. 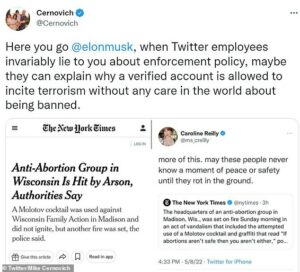 Following his reply to Cernovich’s tweet, the billionaire CEO clarified his belief on the platform. He stated how speech on Twitter is supposed to be governed by the country’s laws, in which it is clearly being used. This highlights his continued emphasis on the right to freedom of speech, which he clearly wants to establish as he slowly moulds Twitter in his own way.

‘’Like I said, my preference is to hew close to the laws of countries in which Twitter operates. If the citizens want something banned, then pass a law to do so, otherwise it should be allowed.’

The Tesla CEO acquired Twitter Inc on April 25 for $44 billion. He expressed his aim of making the social media platform an ideal space for free speech in the US. His takeover of the company is set to fully get completed by second half of 2022.

The billionaire CEO specified how he hopes to ‘authenticate all humans,’ removing various spam and bots accounts. Moreover, Musk looks forward to enhance Twitter with new features, with making algorithms open source in order facilitate better trust. However, he had visibly drawn political lines prior to his Twitter acquisition. Resultantly, he entangled himself in unnecessary international conflict.

On Friday, May 6, Tesla Inc followed big companies by offering travel compensation for workers seeking abortions, but residing in states where it is banned. This was after a Supreme Court document leaked the possible overturning of Roe vs. Wade.

Moreover, the Tesla and SpaceX CEO disclosed how he felt threatened by head of Russian space agency over him offering Ukraine help in the form of Starlink’s service.