The trade war between the United States and China is beginning to affect the share prices of US-based companies, as stocks of ASML Holding fell on Tuesday. ASML Holding which is one of the largest suppliers to the semiconductor industry around the world suffered losses in the stock market as Bloomberg News reported that the US government is planning to restrict the company from selling any products to China.

Even though there have been restrictions on the company to supply vital and advanced products to China, the company is making a large amount of money by selling older and not-so-important tools and machines to China. If the reports are true, even those transactions would be affected, which will result in very serious economic repercussions for the company.

ASML supplies machines which can produce Deep Ultraviolet to the Chinese companies who are into the production of semiconductors chips. This deep ultraviolet technology is kind of outdated when compared to “extreme ultraviolet” lithography technology. 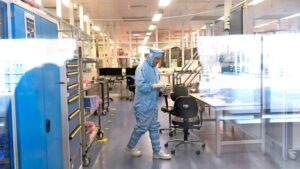 United States and Netherlands came into an agreement few years ago, which restricted supply of advanced machinery related to semiconductor industry to China. Even since that, from 2019 onwards, ASML has not been able to sell advanced machines and tools to China. Governments have not granted ASNL for sales like that.

This information is expected to have caused a disruption in shares of ASML Holdings. After the report got released, ASML shares in NASDAQ sank by nearly 7%. As of now, the shares are being traded at 433.33. This was 450 on July 1st 2022 (Friday).

Wedbush Securities Inc. reduced its stake in ASML Holding by almost 5%. There is no confirmation regarding whether the reduction was part of or related to the news report.

According to a spokesperson from ASML, there has been no information or any messages from the  government of the United States of America regarding any such changes in the policy. The company does not want to speculate and make comments based on rumours.

ASML Holdings is one of very few companies in the world that is into the manufacturing lithography systems and other such vital machines and tools for the semiconductor industry. Various chip-making companies such as TSMC, Samsung, and Intel are being supplied with vital machinery by ASML.

Markets and companies are also concerned regarding the after-effects of any restrictions on the sales of machines to China. Any kind of restrictions on machinery supply will have direct impact on chip production in China. Even though it will hurt Chinese companies badly, the world is again going to face a chip shortage, which would be economically challenging.