Bangalore based Ather Energy announced that the start-up has successfully raised funds worth $ 128 million USD in a round that was mainly funded by the Strategic Opportunities Fund (SOF) handled by the National Investment and Infrastructure Fund Limited’s (NIIFL) along with other groups and angel investors.

Ather Energy is a Bangalore based start-up founded 9 years ago in 2013. The company is one of the largest and most successful producers and sellers of electric scooters and two-wheelers. The company currently produces two models of electric scooters and they even have a comprehensive charging grid across the country that is known as the Ather Grid. 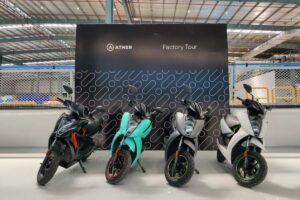 This is the group’s first ever investment into the world of electric and battery-operated automobiles. This funding will now enable the group to take part in helping the electric vehicle industry penetrate deeper into the automobile industry as the field is still relatively new and still in the stage of expansion. The electric vehicle industry is in its early stages and the founders of the company and traversing through an industry not travelled at all in the Indian economy. Therefore, the groups that fund these companies play an important role in imparting advice to the entrepreneurs and helping them grow.

Ather Energy is predicted to grow a lot over the next few years as more people are slowly preferring electric vehicles over petrol and diesel ones. Add to the fact that the market for two wheelers is massive in India, companies like Ather Energy have a potential to grow substantially over the short run and long run.

Including their latest investments, the company has received funds worth over $230 million USD ever since its inception 9 years ago.

This investment takes place at a time where people are slowly recognizing the need for electric vehicles due to the pollution that fuelled cars and two-wheelers cost. The rising prices in petrol and diesel are also making consumer consider switching to electric vehicles. However, as seen with companies like Ola, paving the way in a new industry is not as easy as it seems as money of the products fail quickly or are just not suited for the hotter, drier, and harsher Indian weather. With many of the electric scooters catching ablaze as well, the choice to purchase them isn’t as straightforward as many might think. The future of automobiles does seem to be electric, but companies like Ather and Ola should solidify themselves as big players as soon as possible before they are left behind.