Ausodhyatmika : Your Right to Knowledge of Your Medicines Has Become a Reality ! 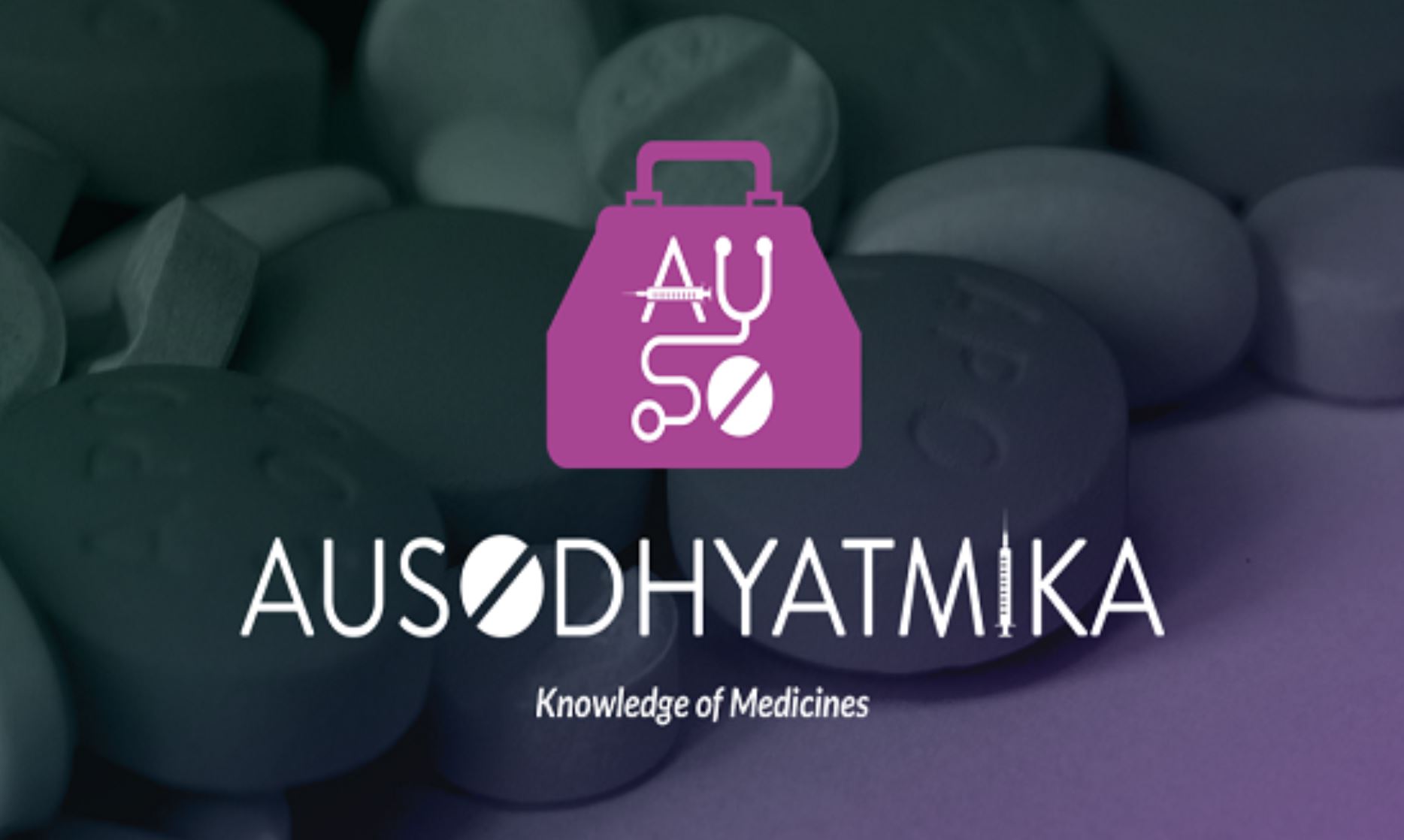 We all might have come across the “prescription scam” flourishing between the Doctors and the Pharmaceutical Companies. For those of us who haven’t had the privilege to view the NDTV 24×7 exclusive in June 2014, here’s a small gist. The Prescription Scam is about the huge bribes paid to doctors by various means to prescribe expensive medicines of a particular company even though their generic variants are available in the market at much lower cost having no quality difference. The Doctors have basically misused their patients trust.

Now, that all of us have an idea about the Prescription Scam; how do we stop it? Question every Doctor and Medicine seller ? That’s highly impossible. The root cause of these problems is the lack of knowledge or rather the ignorance of the common people about the medicines. 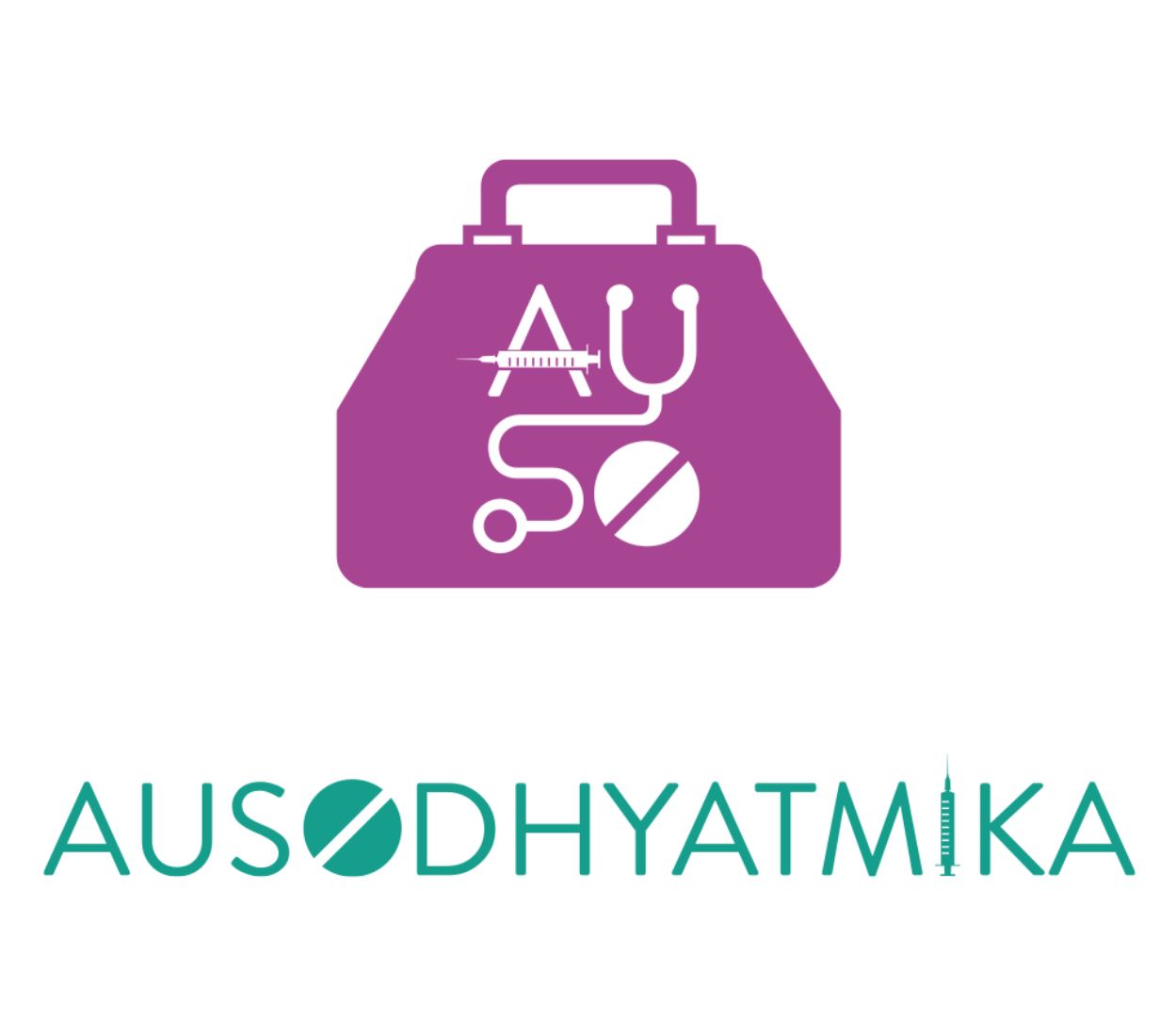 This is not just a quote made by Mr. Krishnakant Tiwari, bur he also took inspiration from this self-made quote and worked hard day and night to remove this ignorance. He decided to empower people with medicinal knowledge so that they can find alternate medicines having same constituent(s) composition as that of the expensive prescribed medicines and/or can take help of healthcare professionals in selecting medicines based on their affordability and availability.

As per the global trend, India is set to become the 10th largest pharmaceutical market by 2015 with a market size of 20 Billion USD. The fundamental idea behind launching the app “Ausodhyatmika”, was to remove the exploitation of patients by Doctors for personal/monetary gains from the pharmaceutical companies. 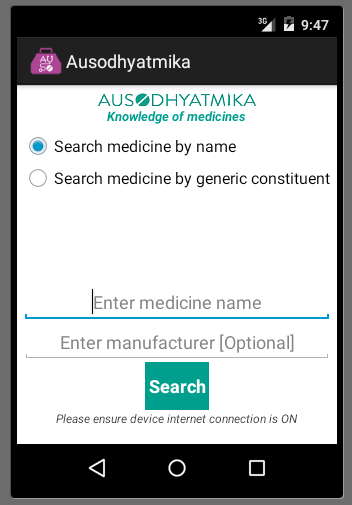 Ausodhyatmika is a social service mobile application built on an android platform that provides details about medicines so as to empower common people of India with knowledge of medicines. It is expected to be a foundation that will focus on bringing the benefits of knowledge and technology, especially digital and mobility technologies, to the people in distress. People in distress do not necessarily mean only the poor. It refers to people who don’t have access to the right information.

Ausodhyatmika provides medicine details such as its name, constituents, type, price per unit, manufacturer, symptoms, conflicts, warnings and side-effects. Based on the constituent composition of a medicine, it also provides alternate medicines/substitutes having same constituents sorted by price in an ascending order. With the help of information provided by the App, people can always take a second professional opinion in selecting medicines if they feel the medicines prescribed are of much higher cost.

The idea is to build basic applications like ‘Ausodhyatmika’ and provide basic services free of cost and free from advertising and any underlying bias. Once the applications are used by masses, the usage data can be mined for insights using data science. Value added services can be built using these insights and these services can be useful for other NGOs, GOs and Corporates.

“Provide apps for free and build insights based on usage. Use the insights to develop value added services and monetize the usage data”

This has been the business model for Ausodhyatmika, it was developed with no underlying commercial interest. This is also the very reason why this is a free app in the market. Ausodhyatmika helps reduce the burden of medicine cost to a great extent without compromising on the quality of the medicines. 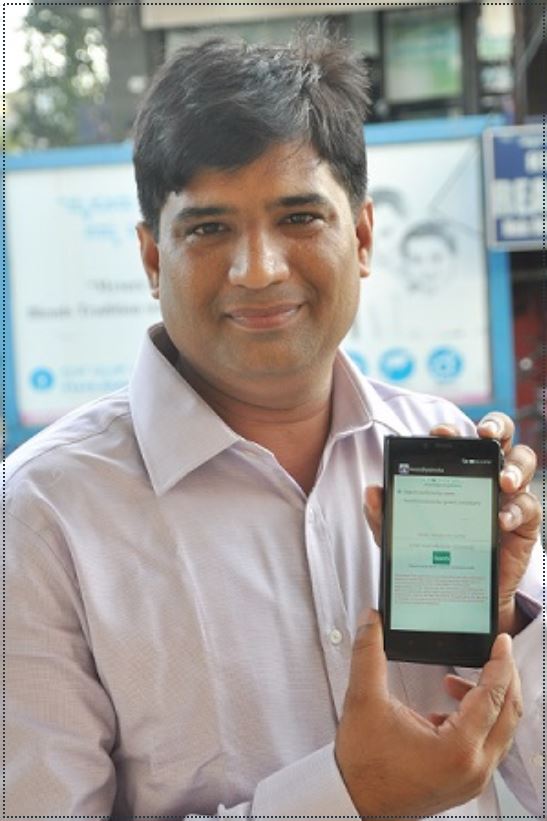 Mr. Krishnakant Tiwari, the sole creator and developer of Ausodhyatmika and hails from a family that has a rich tradition to serve the nation, be it agriculture or defense. He is an Electronics Engineer by qualification, working as a Software Developer in Mindtree Ltd, Bengaluru, India. Ausodhyatmika was developed by sacrificing the spare time he used to have at home.

The journey undeniably must’ve been a challenging one. Collecting information about medicines and centralizing it into a Database is the first big challenge he faced, but with the passage of time it started growing and now the app has more than one lakh medicine records in its database.

The second big challenge is the development of app itself. Coming from a background of Microsoft DotNet web application, mobile application was totally a new platform for him. Given the number of android mobile users in India, he decided to launch the android version of the app, for which he had to learn it from the scratch. He wanted to provide the medicine search results within fraction of second when user makes a request. He had implemented all sorts of possible logic to optimize the database search engine.

The development was finally completed after huge toil and then came the testing part to ensure that the application does not crash at any point of time. Thankfully, Ausodhyatmika was self-vaccinated from all bugs.

With the number of apps that are living in the Playstore, you need to publicize your app in order for it to reach its full potential. This is an altogether different platform for the developer by nature. After huge struggle with the media to promote his app, he was undeterred by the constant denials he faced. He started educating people individually about Ausodhyatmika, and also through social media.

The light was found at the end of the tunnel, when the “Times of India” published the very first article on 19th June, 2015. It was followed by its affiliated networks Economic Times, Konkan World, 24Duniya and Pharmachitchat. The medical web portal ‘MedicosIndia’ from Mumbai also published an article on Ausodhyatmika, the journey continued with Hindustan Times, presently Techstory and still many more articles are expected to be published soon.

The Future Versions of Ausodhyatmika

Ausodhyatmika is an evolving app, in addition to the one lakh plus existing database; whenever a user searches a medicine and if the record is not available in the database, the search gets stored and later on Mr. Tiwari personally updates its information in the Database. Apart from making android version of Ausodhyatmika reach common people, the next big challenge left is to launch the IOS and Windows version of the app followed by its data analytics and reporting.

Mr. Tiwari does not want Ausodhyatmika merely stick to the Health sector. He plans on expanding his ideas to the “Judiciary” and “Law & Order” domain. He realized the big void in the market for applications that can help common people alleviate their pain, if they are entangled in these three aspects.

The Road to Revolution from Ausodhyatmika’s Evolution

Mr. Tiwari has a future roadmap to enhance Ausodhyatmika with additional features as well as enhancements based on user’s feedback. He is intended on setting up a foundation/trust to bring Ausodhyatmika under the umbrella of social work so as to spread it nation-wide. He also wants to create a team to develop social service applications and do its marketing based on the social need.

Ausodhyatmika is expected to cater to a larger number of visitors, for which there should be an increase in the server capacity, to deliver search results without compromising on the speed. Currently, all the expenses have been bootstrapped by him, but for maintenance and upgrading the cloud infrastructure, the app requires funds.

He believes that building a very strong social structure based on the power of knowledge using technology can eradicate corruption from India. People with a common goal to help India become a super nation can join his cause by providing monetary contribution for setting up the foundation/trust and its infrastructure. We can find the details under “Support social cause by contributing” in the website www.ausodhyatmika.com