BarnBridge: Everything you need to know

Cryptocurrency has been with us for a long time now and from the time it was first introduced, it has been seeing a constant surge in growth and popularity and over the past couple of years, millions of new customers have joined in and numerous currencies has been launched in the marketplace. Crypto, as it is often known by millennials these days is nothing but just a form of virtual or online currency which is somewhat similar to the physical money that we are used to.

Seeing its popularity on a global level, I am forced to assume that many of you already know and are aware of the whole concept of digital currencies and how exactly do they operate but as usual, we’ll start first with the basics of cryptocurrencies for some of you who still don’t know what it is. Crypto is a blockchain-based platform that can be used for a variety of purposes including trade and exchange over virtual crypto exchanges as well as for buying and selling goods and services but over the internet of course.

Cryptocurrency is one such industry that has been booming for quite some time now and it has managed to make a name for itself on an international level, which might also be the reason for several potential investors from all around the globe to be intrigued in investing in the currencies along with some people who may be considered celebrities, such as Elon Musk, the CEO of Tesla who has been very active in regards to some cryptocurrencies on Twitter, which just so you know gained huge success in the field and their prices skyrocketed after the incidence.

Apart from these, some other reasons that are significantly responsible for the success of the industry is the fact that they are very easy to use, intuitive, user friendly, and most importantly its portability which makes it very convenient for users on the platform. Just like every coin has two sides, digital currencies are no different. Some downsides of crypto include uncertainty, high volatility as well as its ability to be used for illegal and unlawful activities, which just to be clear is a criminal offense and is not recommended!

In addition to this, as mentioned previously, cryptocurrencies have evolved over time and new currencies come up every day. Some of the most popular currencies that are available today in the marketplace include Bitcoin, Ethereum, Binance Coin, Dogecoin, Baby Doge, and a lot more. lastly, it is worth mentioning that, it is a common understanding these days among global experts on the field that cryptocurrencies are the future of payment systems on the planet and will soon revolutionize the industry.

Now that you have the basic understanding of what exactly is a cryptocurrency, I sincerely believe that you will be able to have a much better understanding now of what we have with us today, BarnBridge. To know more, I suggest you read further!

Everything to know about BarnBridge (BOND) 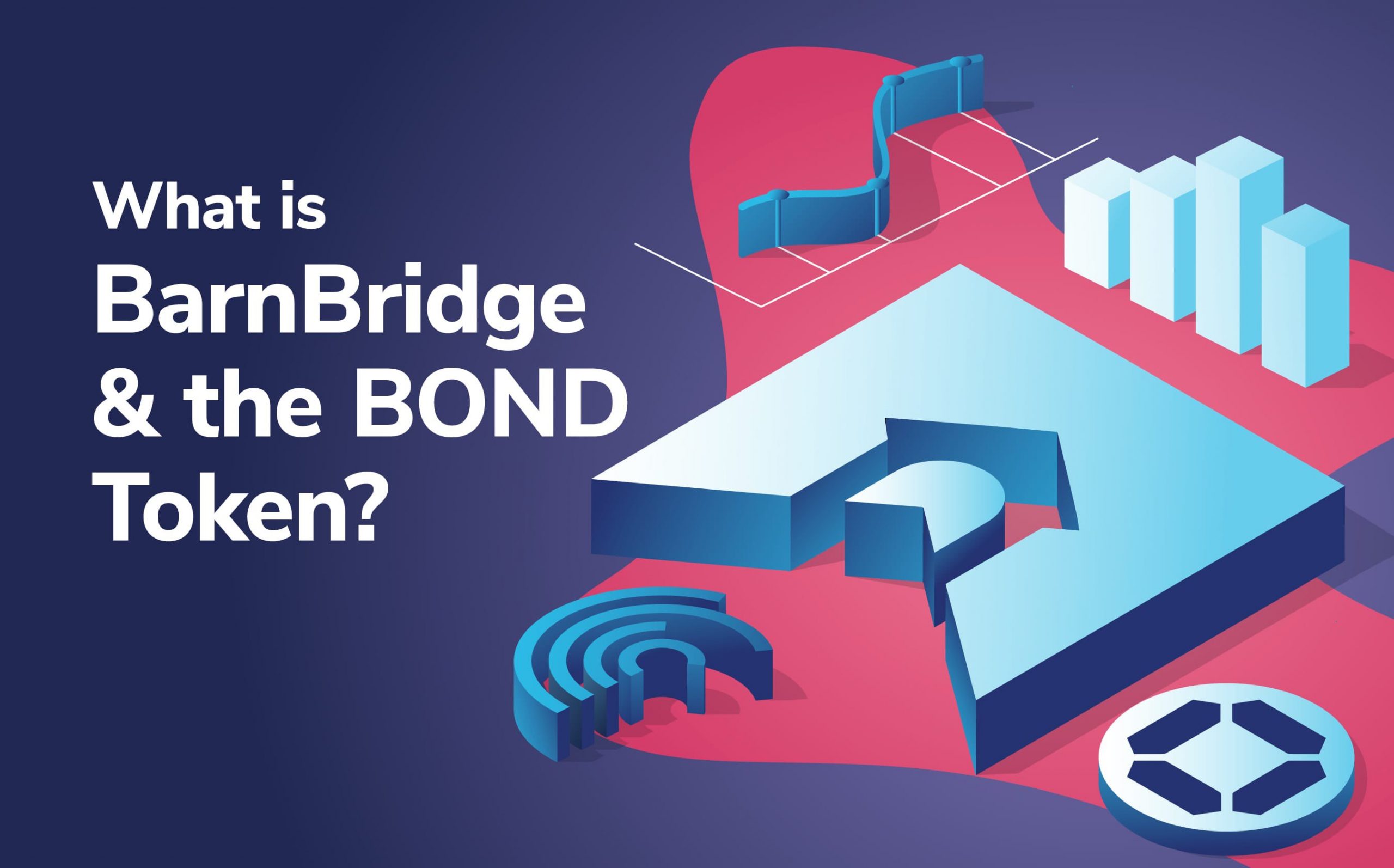 BarnBridge or as it is often referred to as BOND is a protocol for tokenizing risks which was founded around two years ago and was launched in September 2020. BarnBridge is one such platform that helps in expanding the overall functionality of decentralized finance (DeFi) in order to make it much more efficient as well as flexible, to say the least. Basically, it allows users on the platform to hedge against price volatility as well as yield sensitivity.

In simpler words, BarnBridge is somewhat a unique project in the marketplace that focuses on lowering the risk with the help of the development of tokenized risk protocol. For clarification, being the first-ever cross-platform risk tokenizing protocol, the platform focuses on reducing the risks that are often associated with decentralized finance including the risk of inflation as well as the volatility risk of market prices and interest rates.

Also, as mentioned, the network introduces smart bonds, a crypto hedge token as well as debt pools. All of these systems together combine the top protocols for DeFi with the aim to provide its users with derivatives for risk mitigation along with normalizing risk curves.

In addition to this, BarnBridge lowers volatility on the platform for conservative investors or increases it further for daytraders, while enabling instruments for fixed income as well as traditional risk management tools on the market of decentralized finance. In short, the main aim of the platform is to segregate the risk of virtual currencies into tranches so that market participants can invest in different assets or products, depending on their risk profiles. 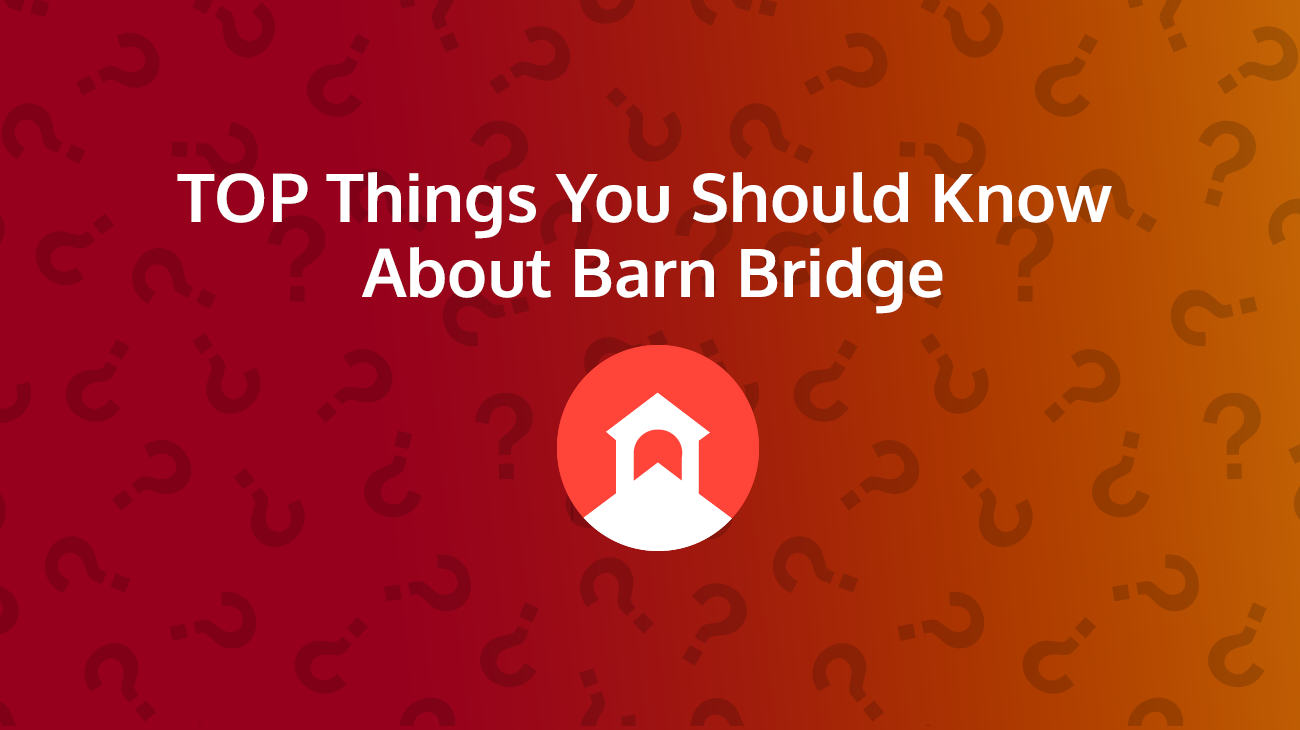 It does so by just simply accessing debt pools on several other protocols of decentralized finance, thus creating numerous assets with varying return/risk characteristics, that too within a single debt pool. It is worth mentioning that, the first application of the platform was SMART Yields which was known to allow users to choose among various risk profiles for the purpose of lending on DeFi protocols including Compound and Aave.

With the help of SMART Yield, BarnBridge offers its users investments in junior and senior tranches, where the investors in senior tranches will be received payments with fixed interests, and whatever the remaining proceeds are, they go to junior investors who can then max out at prices with much higher interest rates but who don’t always have guaranteed payouts.

Furthermore, BarnBridge aims to provide investors on the platform with a tailored experience in order to meet their risk appetite. Not to mention, BOND that I mentioned earlier is the native token for the platform. BOND is an Ethereum (ERC-20) token that governs BarnBridge and holds various duties as a multi-utility token including staking. As a result, the holders of the token can easily stake their tokens in order to secure the network. Also, the BOND token will allow holders to vote on governance proposals on the platform.

Also, it is vital for you to know that the distribution of the BOND token began in October last year and is expected it to take place over a period of 2-3 years. The BOND token is said to facilitate decentralized as well as automated governance with the help of BarnBridge decentralized autonomous organization(DAO) which is further managed by the BOND token community. 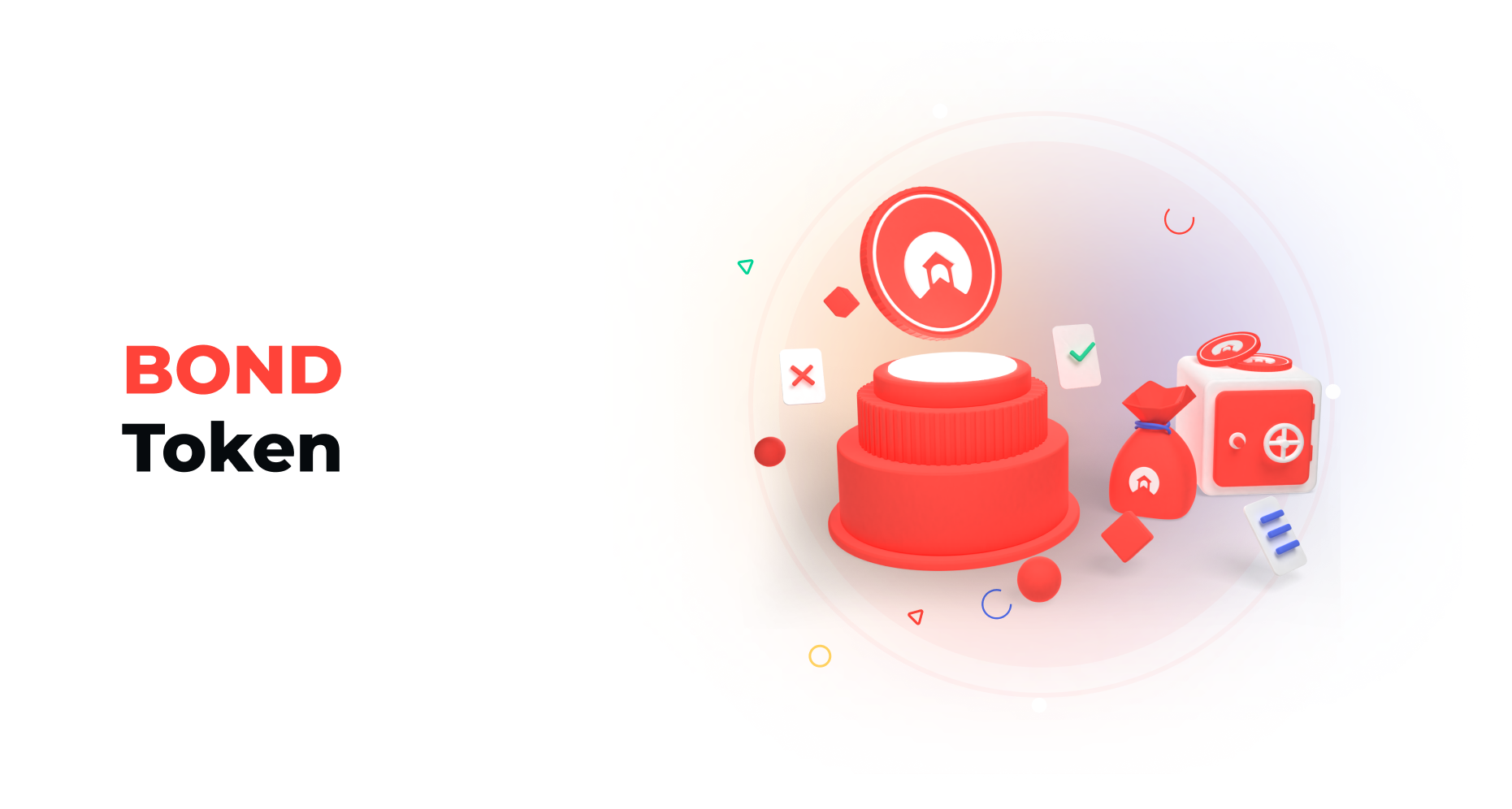 A few platforms of decentralized finance including Aave as well as Compound are known to provide over five percent Annual Percentage Yield(APY) on some assets. But, with profitability optimizers just like yEarn, the annual percentage Yield can even go up to ten percent. Not just that, another downside of this is the fact that they don’t always offer users with fixed income and also have certain risks involved as well.

This is when BarnBridge comes into the picture. A benefit of BarnBridge is that it can easily improve the efficiency of the system by aggregating the yield with fixed income along with flattening them as well. As a result, this makes entry into the cryptocurrency world a much more predictable and personalized experience for users, thus, opening it up to a much larger global audience. Also, from the perspective of traditional finance, the platform can even be used to further increase the effectiveness of stock trading.

BarnBridge is one such platform that is known to create tokenized derivatives, majorly based on the fluctuations in the marketplace. These derivative tokens that I just mentioned are further divided into risk/reward categories of high, medium, and low. In addition to this, the platform also supports SMART Alpha Bonds that play a vital role in tokenizing price risks and can expose the users on the platform to high, medium as well as low price fluctuations. Just so you know, some major competitors of the platform are Opyn as well as Hegic. 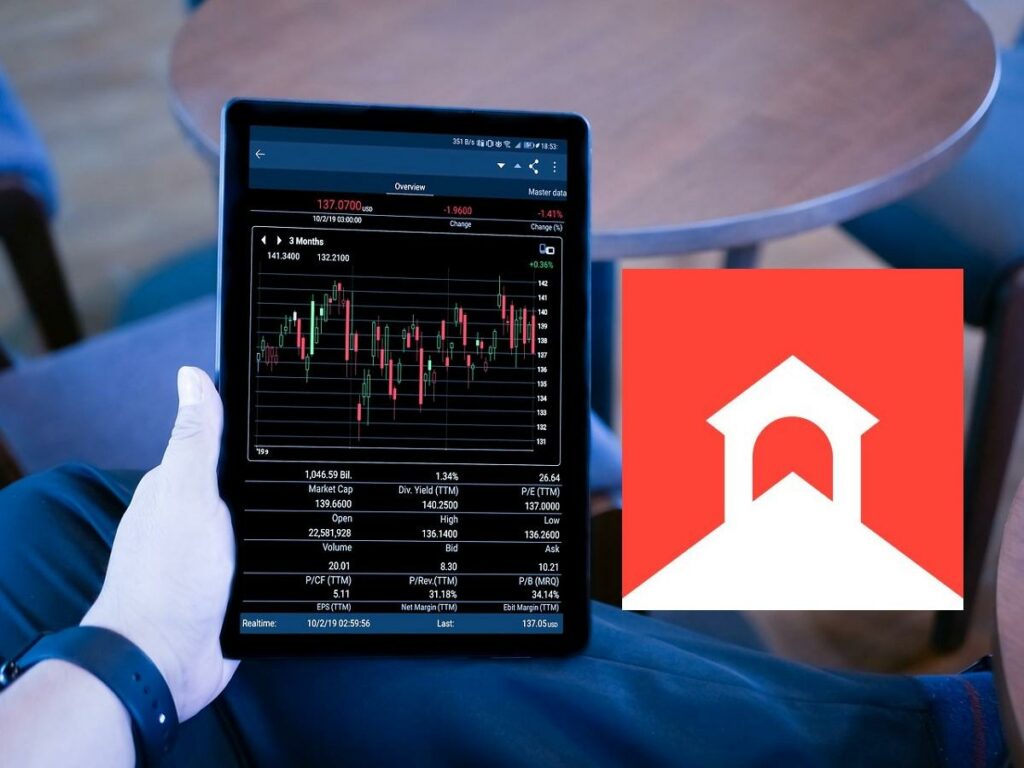 As of today, the price of BarnBridge is about 26.37 US dollars with a twenty-four-hour trading volume of 119,454,354 dollars. Not only that, in just the past twenty-four hours, the price of the platform has gone up by nearly 19.05 percent and with a market cap of 118,694,415 US dollars, BarnBridge is currently placed at the #328 position as per the CoinMarketCap rankings.

As far as investing in the platform goes, reading so far, you might have gotten a fair understanding of the platform and by now you should be able to decide on your own, whether or not investing in BarnBridge is the right thing for you to do.

BarnBridge presents some unique aspects of decentralized finance and is able to create a new way for investors to earn profit. Seeing the recent past of the platform, when combined with its future plans and what it has to offer, I sincerely believe that investing in BarnBridge might just be the right place to invest if you are someone who is looking to earn a good return in the long run. 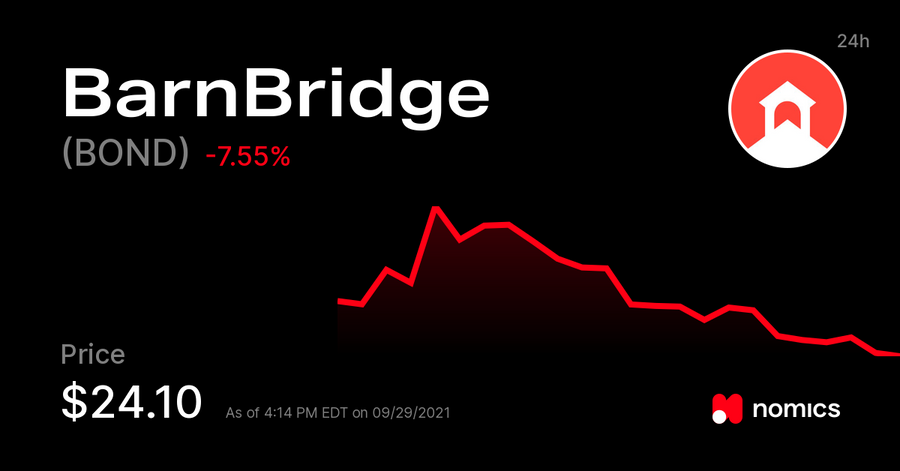 But again, as mentioned at the very beginning, crypto is a highly volatile marketplace and is extremely uncertain. Thus, It is extremely important for you to understand the fact that just like any other currency in the crypto marketplace, BarnBridge does have its own risks as well and you should invest only if you are willing to take those risks and bear any and all losses if at all necessary.

If you are wondering, where can you buy BarnBridge? Let me help you with that. Currently, BarnBridge is available on all major crypto exchanges but some of the popular exchanges that have BOND listed on them include Binance, Coinbase Exchange, BKEX, KuCoin as well as Mandala Exchange to name a few.

In conclusion, What are your thoughts on the BarnBridge? Do let us know in the comments below. To know more about various cryptocurrencies, do check out other articles we have on our website. Thank you for your time & if you found our content informative, do share it with your investor friends!

Also read: DerivaDAO: Everything you need to know