Basecamp, an American software giant based in Chicago, Illinois has taken a decision that has baffled everyone in silicon valley. It has issued a new etiquette rule regarding the behavior of employees around politics when they are at work. This decision can largely alter workplace culture.

The company has explicitly stated that the world we live in changing and our opinions take a dark turn very often in conversations. Words are taken out of context and interpreted in ways they shouldn’t have. The company wants its employees to steer clear of conversations that can take a dark turn. It believes that these conversations are no longer healthy for work culture as they have become “stressful, unnerving and counterproductive”. Hence, the company co-founders Jason Fried and David Hansonn have requested everyone not to use Basecamp or HEY to discuss politics at work. 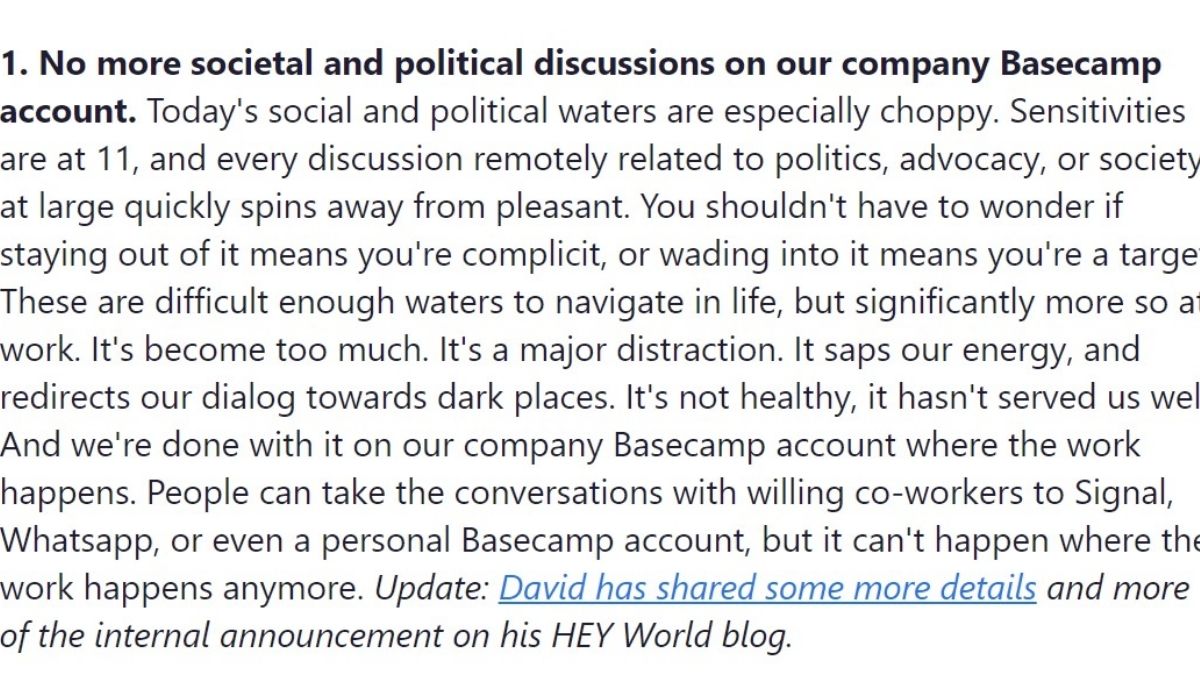 The company’s controversial move drew some serious flack on Twitter from employees and other users. What the company saw as a move to increase productivity, people saw as a move to suppress workplace discussion.  For years, the company has marketed itself as being untouched by the vices of capitalism and this step is being regarded as the complete opposite where only production matters and discussion has no place.

Before this Coinbase has also decided to implement a “Shut up & work policy” which was regarded as regressive and wrong. People were very dismayed by the decision and reacted with harsh words.

Basecamp pulls a Coinbase and decides to exclude marginalized people by prohibiting "political" discussions at work, despite our lives and existence being inherently political, film at 11 🙁 https://t.co/FSHE0shGqh

The idea has been called bad which will give rise to toxic work culture only favorable to privileged communities and would exploit the marginalized people of the workforce that forms a big chunk of silicon valley. The idea of banning political discussions at the workplace seems to be against the idea of inclusivity.

I am genuinely impressed by this post. They really just took every possible bad leadership idea and ran with every single one of them
https://t.co/Q5rso1sS62

Some people went further to say that the company’s policies were against the changes that are occurring and demanded by the marginalized. Others called the co-founders hypocrite for taking part in political dialogs and preventing their employees from the same.

It's hypocritical how Basecamp is now a "leave politics at home" company. For months, their cofounder was in the news criticizing everyone. It's only a problem when their employees want the same privileges/freedoms on matters directly affecting them.