Robotics has been employed in various fields when it comes to problem solving and carrying out dangerous tasks. It has proved to be a valuable asset and also a reliable source. Having said that, many industries and fields are now including robotics in more and more processes. But we don’t see many robots being used in the construction process.

Construction of building or as a process in general can prove to be very dangerous. It could be because of dust, fumes and even debris around. Life threatening situations are not uncommon in this line of work. But this field is still dominated by humans despite the hazardous conditions of work. 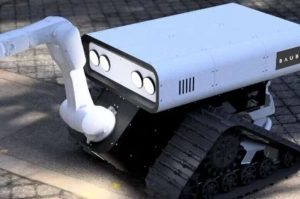 In order to solve this problem, Printstones, a robotics company has developed a robot called Baubot. This robot, the company hopes will be able to supplement human construction workers onsite.

The robot Baubot is capable of transporting heavy loads, laying bricks and even sand sheetrock. The company has developed two robots so far and both the robots are currently in pre production stage. But the workers who are currently employed in this sector have started to raise concerns whether these robots will replace them in the future.

The robots are currently priced at 150,000 euros as their starting range. Along with that the company specified that it would take them approximately six months to ship a unit of these robots. With that being said, the company has also specified that the final cost of these robots will depend upon the amount of engineering required in the manufacturing process. Another factor that will affect the final price of these robots is the amount of application implemented in the robots.

Baubot manufacturers, Printstones are an Austria based company. The company has managed to come out with two robots so far. One of the robots is bigger in size with an 82 inch arm and the smaller one comes with a 40 inch arm.

The arm tips of these robots are highly skilled in order to perform functions such as cut, drill, sand and are also equipped with a suction feature. This suction feature allows the robot arm to pick up heavy rocks and place them on designated locations. Both the robots are capable to transport over one ton of material.

The company hopes that the robots which are built by the Printstones company will be able to replace human’s involvement in the construction process. This is due to the hazardous working conditions and in order to avoid potential dangers to life and loss of human life.

The company has revealed that the robot’s machine programing and capabilities is able to reflect all types of work which has been carried out by the construction workers so far and is able to function with live construction tools.

According to Printstones their robot Baubot’s usability is not only limited to the construction industry. This robot can also be utilized in the shipbuilding and aerospace sectors and can also be used for inspection and maintenance purposes for the infrastructure which currently exists in areas such as the power plants.

This robot is said to improve the safety conditions in the manufacturing areas and will also be able to reduce the building and maintenance costs in the long term.