Bengaluru man orders food from Swiggy, gets it via Dunzo. The latest entry to ‘peak Bengaluru behaviour’? A Swiggy agent who outsourced his job further and booked a Dunzo ride to deliver an order. 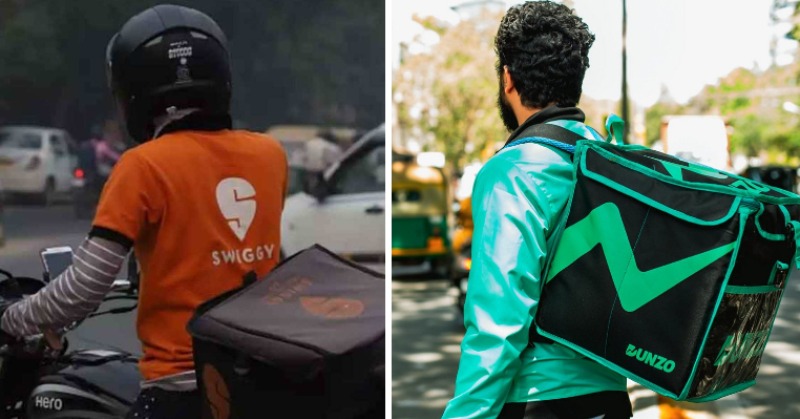 A bizarre incident allegedly took place in Bangalore a few days ago and it is now going viral on social media. It all began when a man placed an order at a CCD outlet for coffee through Swiggy. After the order was confirmed and packed, the delivery agent picked it up.

However, what happened after that was not something so usual. As per a tweet by user Omkar Joshi, the delivery agent booked another person from another delivery app called Dunzo and asked the customer to give him a 5-star rating.

Twitter user Omkar Joshi shared a screenshot of a conversation he had with a friend, who recently ordered coffee through the food delivery platform Swiggy. “I ordered a coffee on Swiggy from CCD,” his friend told him. “The delivery guy picked it up but was too lazy to come to deliver it here,” the friend continued.

Too lazy to do his job but too enterprising to give up and risk a five-star customer rating, the Swiggy agent booked a Dunzo delivery partner to deliver the order.

“[He] was too lazy to come to deliver it here so he Dunzo-ed it to me,” Joshi’s friend told him. “And I get a call from him saying ‘Bheiya Maine Dunzo kar Diya hai, please 5-star rating de Dena (I have sent your order through Dunzo. Please give me a five-star rating).”

The post has gone viral, eliciting amused responses and funny comments, and many described it as peak Bengaluru behavior. One user wrote, ”Hahahahaha!  Love Bengaluru, the full city is a joke.”

Another defended the delivery guy, ”Instead of saying him lazy… Respect his professionalism, likely he paid more than what he can get through swiggy. Some conditions with him didn’t allow to deliver.”

Similar thing happened but the guy’s two wheeler hot punctured genuinely. But he came little late and delivered. I gave him 5*

Who orders coffee online? Who? https://t.co/0hyIYRw0V8

The incident nonetheless has left the netizens in splits. Since uploaded, the image has managed to garner over 3K likes and multiple comments. Tweeples are also seen Retweeting the image with hilarious captions.

“Still better than ola and uber, the arrival rate of ur driver to pick you up in Delhi is 1 out of 5 times. zomato guys are still coming 49/50 times,” wrote a person on Twitter. Another person wrote, “Similar thing happened but the guy’s two-wheeler hot punctured genuinely. But he came a little late and delivered. I gave him 5 stars.”