Bitcoin or Burritos? Chipotle is giving away both for free!

You can now win free Bitcoin or Burritos as part of the promotional program of Chipotle. The growth of Bitcoin’s price and popularity and love for Burritos is expected to make this program a success. BTW, for those hearing about Chipotle for the first time, it is a Mexican food chain group in the US. And the reason for this event is the National Burritos Day on 1st April. It has also been confirmed that unlike many announcements made on the date it is not an April Fool’s Joke. 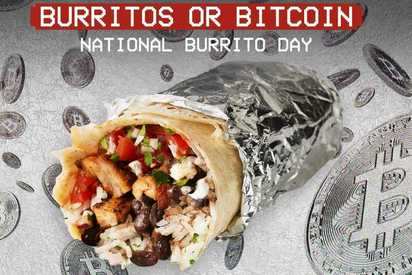 After the sneak peeks of the announcement, the company unfollowed everyone except Bitcoin.org and Stefan Thomas. And they went ahead to announce the game. The Bitcoin or Burritos game is easy to play and users can win burritos, $500 or $25,000 in Bitcoin. But remember the number of winners will be very limited. If you are able to guess the six digits code right in the game you could get a chance to win a burrito or some amount of Bitcoin. It has also been reported that Chipotle will choose 10,000 winners for burritos, 50 winners of $500 worth of BTC, and 3 winners for $25,000 worth of BTC.

This game is based on the famous incident that happened quite some time back. Stefan Thomas who is followed by Chipotle lost the password to his wallet having $220 million worth of Bitcoin. And when guessing the code the idea is to guess the same code. Yes, it is a fun way of promotion but there is also no correlation of this to the actual incident. Find more information here, if you want to know the business benefits of bitcoin.

What special about this?

The event makes Chipotle the first company in the US to do a crypto giveaway. It is sure to help them drive a lot more customers to their site and ultimately their restaurants. The main target audience here is the young Gen-Z generations. Chipotle says that “The obsession with Bitcoin is as almost as big as burritos, so we wanted to give fans a chance to win on our biggest national ‘holiday’ while also having Chipotle show up again in an unexpected way”.

Are you going to participate in the Bitcoin or Burritos event? And do you think this is a good way of promotion? Let us know in the comments below. Also, if you found our content informative do like it and share it with your friends.