Donald Trump became more than just the name of a billionaire when he became the 45th president of the United States in 2017. He was also known to have a strong presence in social media even before being elected president. However his posts and messages on social media reflected a conduct that was unbecoming of a president.

A report from the New York Times published in 2019 showed that during his time in office, Trump retweeted 217 accounts that have not been verified by twitter, out of which 145 of them presented conspiracy content. After this incident Twitter banned more than two dozen accounts from the mentioned 217 accounts. His posts were often noted to be controversial, false and even racist. This resulted in divisions within the party as several of his comments and posts went against his own propaganda. This is also believed to be one of the many reasons for the downfall of the Trump Administration.

In 2020 Twitter began monitoring Trump’s Tweets because of false suggestions and misinformation that was being spread about covid-19. After he was defeated by Joe Biden in the presidential election, he took to Twitter and other social platforms spreading false information about the election, as an effort to undermine the result. This resulted in triggering the storming of the U.S Capitol and Trump along with several of his allies were immediately banned from Twitter and Facebook following these incidents. This resulted in a huge decrease in spread of election-related misinformation in the subsequent days. 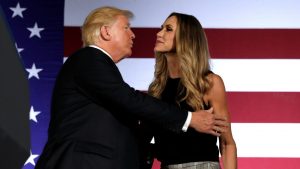 After more than two months of radio silence from Trump, he again made his presence on social media by posting his interview through his daughter-in-law Lara Trump’s account. The non-profit organization Media Matters for America raised the issue with Facebook and they immediately took down the post.  After the post was taken down, Lara shared the screenshots of the emails sent by facebook, which read, “We are reaching out to let you know that we removed content from Lara Trump’s Facebook Page that featured President Trump speaking. In line with the block, we placed on Donald Trump’s Facebook and Instagram accounts, further content posted in the voice of Donald Trump will be removed and result in additional limitations on the accounts.”

These rules not only apply to the supporters and administrators of the Trump campaign but also to accounts or pages associated with it.Trump’s social media ban is not expected to be removed until the heat of the government transition dies down. Mark Zuckerberg also responded that the risks of allowing Donald Trump to continue to use their service during this period were simply too great. There are also speculations that Trump is moving forward with plans to start a social media platform.