Bitcoin Prices crash by a whopping 87% after an all-time high!

It is a well-known fact and unwritten rule that crypto prices are on a perennial rollercoaster ride. You never know when they will go up or down. And at the moment, Bitcoin prices are on an epic down ride. Bitcoin prices dropped to a whopping $8200 on Binance U.S. These flash crashes once again underscore the uncertainty factor innate in the crypto domain. Twitter has been brimming with responses following the news and the chaos is quite justified given the massive fall in prices. Nobody knew that the “all-time high” was just the poetic “calm before the storm.” And the storm is raging quite violently as the investors are left shaken following the fall in prices. 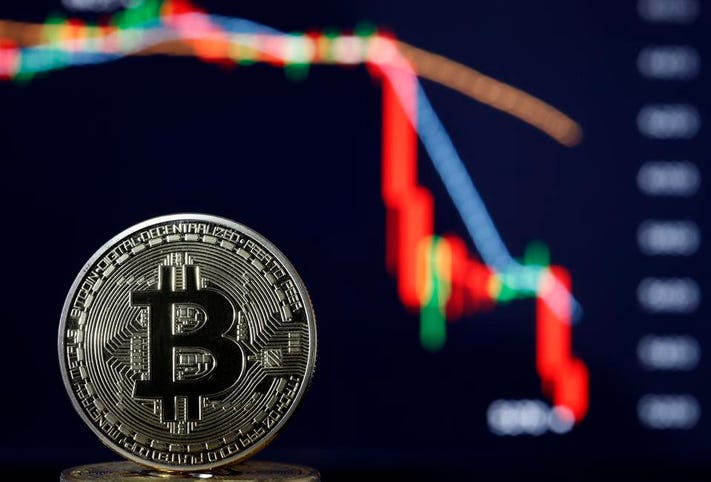 Yesterday was a pleasant day for Bitcoin. The cryptocurrency tasted success as it hit an all-time high of $67,000. However, the taste of that success did not last too long as the effect was soon neutralized by a massive fall in prices which went below $64,000. The notable mark of success, although short-lived, that marked the 20th of October as a golden day for bitcoin was the aftermath of the Bitcoin Futures ETF in the U.S. The exhilaration soon turned to distress as the prices fell hours following a brief correction. In the blink of an eye, fortune shifted its shape to misfortune and the prices went from $66,700 to $63,600 on the majority of the exchanges. The decline was rather massive and impactful on a couple of exchanges like Kraken and FTX. On Kraken, the prices went as low as $54,100 before recovering their stance to $65,000, which is barely a relief.  However, the worst decline was recorded on none other than Binance U.S, where the prices saw a massive drop of 87 percent to a shocking $8,200. And the worst part is that all this shift of fortunes happened in a matter of a few seconds. If you are in search of an example for uncertainty and transience, here you go! You have the perfect shocking example. Soon enough, as the price rollercoaster went further downwards, the brightness of the crypto market in the wake of the recent success was soon eclipsed. The impact of the flash crashes was reflected throughout the market.

Twitter has been brimming with responses ever since the graphs took a downward dive. This is not the first time Bitcoin prices are hitting a low. However, this might be the first time it has hit such a low note. Let us go through a few of the reactions and responses on Twitter following the crash.

Now that is a sad straight line. Don’t you agree?

Such a perfectly straight line. It is almost like somebody took the effort to perfect it.

Binance US casually wicking down to $8200 pic.twitter.com/UykFPl5OAc

#Bitcoin dropped to $8k on @BinanceUS for a brief moment. 🤨

I guess someone f*cked up…again, or this is market manipulation hunting stop losses. 🤷🏻‍♂️ pic.twitter.com/w2cdZBnR6x

All that exhilaration for nothing. It all came down pretty soon, literally.

Bitcoin price flash crashes by 87% to $8K but only on Binance US exchange.

The platform saw prices of bitcoin hit unimaginable lows which plummeted from $65,800 to $8,200 within a couple of seconds. pic.twitter.com/LGAm5o7QLT

They say that everything happens for a reason. I would like to know the cause for this one.

This needs to be investigated! Why did this happen On Binance US?

The exchange crashed to 8k this is ridiculous, I also noticed how alot of BTC left the exchange balance around the similar time. pic.twitter.com/UTAAqeGTU9

Cheers on that joke!

kraken: “our books are laughably illiquid”

binance US: “hold my beer” pic.twitter.com/VHlu94imXP

LOL yo @BinanceUS thanks for those cheap satoshis! Out of the Money Limit buy achievement unlocked! pic.twitter.com/Tq5wq7to82

Binance US get a grip 😂😂😂 pic.twitter.com/AoEfbzDcmy

Now that is some brilliant work of art right there. Art amidst the chaos, How poetic!

BinanceUS well played. I confirm bottom is in. Thank you! I just bought my friend first #bitcoin under $10,000. 😂 pic.twitter.com/VGuwD1E1mw

Not sure where you are looking at pic.twitter.com/Ahh8QswRna

@BinanceUS …..you stole my money💰….. this is called market manipulation…. I hope the weight of the law falls on you….MTF🤬 pic.twitter.com/wWDDuH8gsR