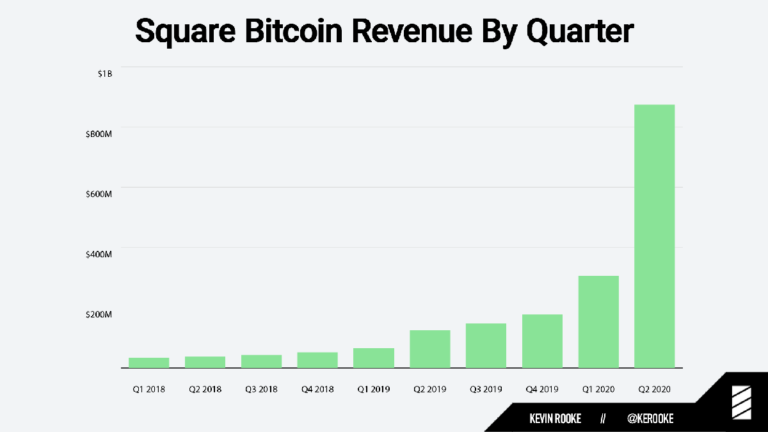 In the second quarter of 2021, the Bitcoin revenue generated by Square’s Cash App service increased by 200 percent. With the recent rise in Bitcoin’s price, the company created by Jack Dorsey saw a large increase in BTC revenue in the second quarter.

Square is ready for price volatility in Bitcoin.

Square noted that when the price and demand for Bitcoin climbed, the company’s crypto revenue and gross margin benefited from the increase in client demand. The corporation went on to say that individuals who worked with items like the most popular digital currency made more money per customer.

Due to swings in the price of the bellwether cryptocurrency and client demand, the payments company expects to experience volatility in Bitcoin revenue and gross profit in the coming quarters.

Square suffered a $45 million Bitcoin impairment loss on its investment in the top cryptocurrency. The California-based company spent $170 million on Bitcoin in the first quarter of this year, adding to its 4,709 BTC buy in Q4 2020.

Similar to electric vehicle maker Tesla, which disclosed a $23 million impairment from Bitcoin in its Q2 presentation, the financial services company is determined to investing in the leading digital asset.

Despite the recent decline in Bitcoin’s price, Square and Tesla remain the top two crypto-assets. Bitcoin’s price drops before unveiling its next goals.

Bitcoin’s price drops before unveiling its next goals.

Since July 20, the price of bitcoin has increased by approximately 50 percent. While BTC climbed above $40,000 for the first time since June 16, it swiftly displayed an overbought warning before beginning its decline.

The 38.2 percent Fibonacci extension barrier and the 100-day Simple Moving Average (SMA) at $39,608 is important to support levels for the bellwether cryptocurrency. Should Bitcoin’s price be able to stay above this line of defense, it will be considered a success.

However, if selling pressure intensifies, Bitcoin price might retest the 27.2 percent Fibonacci extension level as substantial support around $36,482, which is located within the demand zone that spans $35,777 to $37,253.With more negative pressure, Bitcoin’s price might hit the 50-day SMA around $34,919.

On the other hand, a convincing upside release will be required for Bitcoin price to reach higher levels, as bulls face multiple technical obstacles, including the 50 percent Fibonacci extension mark at $42,961 and the 200-day SMA at $44,686.

Also Read: World’s third-largest company, Saudi Aramco is all set to mine Bitcoin?