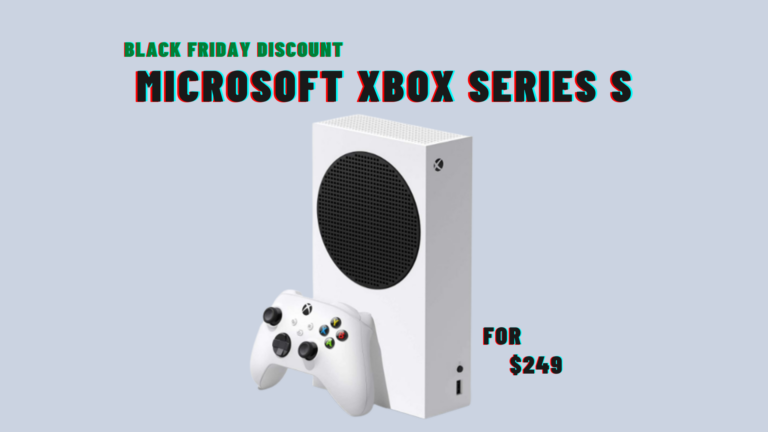 Black Friday is finally coming to a close! Even though there are only a few hours left, we have you covered with all the trendy bargains you can get in the last few hours. As an added bonus, you may now combine deals for both Black Friday and Cyber Monday sales. As a result, this might be a win-win situation for us.

Speaking about trending offers, as you may have guessed from the headline, we have gathered the most recent updates and discounts available for Microsoft’s new gaming system, the Xbox Series S. So, if you’re searching for a new game system for the holidays, you can get your hands on this one right now. Let’s take a closer look at it:

Microsoft Xbox Series S – What does it feature?

Before we get into the cost, let’s look at the specifications and features of the Microsoft Xbox Series S. The Xbox Series S gaming system includes support for digital game streaming, so you don’t have to rely on discs to play games.

When comparing this system to the top-tier Xbox Series X, the distinction is in the digital and disc streaming of games. In addition, with your Xbox Series S, you will receive an Xbox Game Pass, which will grant you access to 100 high-quality games ranging from single-player to multi-player.

When it comes to the design of the Xbox Series S, when compared to the top-tier gaming console, this console is considerably smaller and sleeker. In addition, Microsoft has included extremely efficient internals that will aid in giving greater performance and speed while streaming games.

This high degree of performance is made possible by the Microsoft Xbox Velocity Architecture, which is driven by a specialized SSD as well as a set of integrated software. According to the specifications, this game console has a quicker 512GB NVMe SSD.

In addition, Microsoft is offering an offer in which you can get an EA Play membership for the lowest monthly price ever. This EA plays subscription, however, is available separately.

If you have finally made your decision to get in hands with this new gaming console then you can directly get access to the Target e-commerce platform where it’s been said that this platform is providing a great discount for this Black Friday Sale where the pricing has been brought down to just $249.99.

This game console is now available for purchase on this website. If you are puzzled about the pricing, this gaming system has been advertised at $249.99, and Target is also offering EMI options, where you can acquire this gaming console for as little as $24 per month. You will also receive a $50 Target Giftcard.