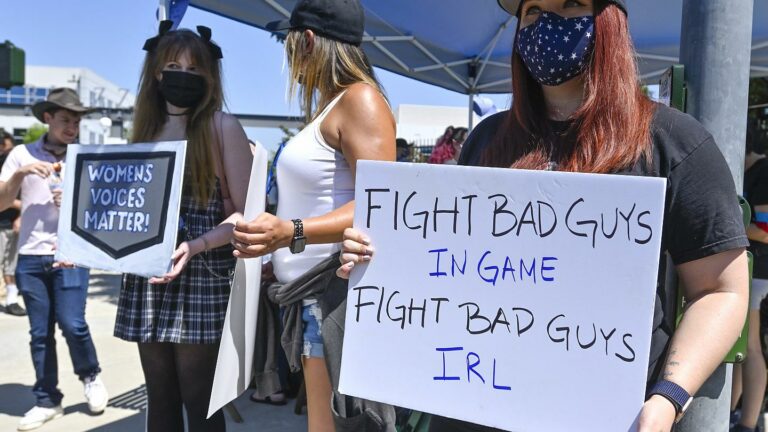 Christine (whose last name has been changed to protect her privacy) had a news conference today in front of Blizzard Entertainment’s Irvine, California offices, where she spoke about her experiences with sexual harassment and retribution while working for the troubled game maker.

Christine made a teary testimony about how working at Blizzard was her “dream job” until she was subjected to improper touching, insulting comments about her body, and invitations to have sex with her bosses. Christine claimed that when she complained to HR, she was told that the persons who made the comments were “just joking” and that they had “committed no crime.”

She further alleged that after filing those reports, she was demoted, denied full profit sharing perks, and received only minor raises during her four years at Blizzard.

Lisa Bloom, Christine’s attorney, also addressed at the news conference. Bloom, a celebrity lawyer known for representing survivors in high-profile sexual assault cases and who previously made headlines for advising serial predator Harvey Weinstein on his assault case, detailed the numerous lawsuits filed against Activision Blizzard for its culture of sexual harassment and retaliation.

She specifically attacked Activision Blizzard’s consent decree with the EEOC, claiming that several of the decree’s parameters had not yet been completed within the agreed-upon deadline.

She also claimed that the consent decree’s $18 million victim compensation fund was insufficient. “Given the number of victims, I think we can all agree that the $18 million amount is woefully inadequate,” she said.

Bloom then laid out three demands for Activision Blizzard: a streamlined process for victims to resolve their claims, an increased compensation fund in excess of $100 million, a genuine apology from corporate leadership, and an independent investigation into the impact Activision Blizzard’s harassment culture has had on employees’ careers, as well as a plan to repair that damage.

Bloom asked other victims to join them in the fight against Activision Blizzard at the end of the news conference. “We don’t want Christine to all be by alone.” I am aware that she is not alone.”

This was the third walkout since news of the lawsuits broke.

According to a storey published in October by the Wall Street Journal, Activision Blizzard CEO Bobby Kotick was aware of, enabled, and occasionally participated in the harassment.

Even as the top three gaming firms, PlayStation, Xbox, and Nintendo, raised worries about these developments, Activision Blizzard’s board of directors affirmed their support for Kotick after shareholder and employee calls for his resignation.

Christine is one of the first active Blizzard Entertainment workers to publicly criticise the corporation. Jessica Gonzales, another outspoken Blizzard employee, resigned in November after months of explaining how her open criticisms of her employer led to harassment from some of her coworkers.