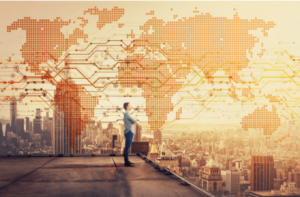 The new Voxel Bridge project may be a blockchain-based augmented reality (AR) experience which will be viewed on iOS or Android devices and is positioned on the side of the Cambie Street Bridge in Vancouver.

According to local enthusiasts, the exhibit will hospitable the general public on Tuesday and can run until spring 2023.
Jessica Angel, a New York-based artist, created a 1,800-square-meter installation that looks at how public spaces may be created and used in both digital and physical settings.

The piece is shaped like a two-dimensional vinyl mural in the physical world but also exists in augmented reality through an app.

Angel commented, “Art is a mobilizing force that has the ability to unite seemingly distant areas, and Voxel Bridge embodies this ability.” “This piece transcends art appreciation into a unifying and experimenting venture that enables blockchain technology, augmented reality, and public art to research new techniques of connection,” the artist added.

The goal is to use art to teach blockchain to the general public from an emotional, rather than an intellectual, perspective, Angel explained from her Brooklyn studio.
A lot of people are hesitant to get into blockchain as It’s very different from what we’re used to. It takes a while to process since it’s so new, she added.

The installation may be a digital and visual representation of the Kusama blockchain network, a decentralized blockchain network that is a “canary” chain for the larger Polkadot network.
The Kusama Council first offered the idea in October, calling it a “high impact art installation” and a “multidisciplinary project.” “Rather than a technical view of the Kusama Network, Voxel Bridge will deliver an experiential view,” a council member said.

If you find this information do not forget to share it with your friends and family!