Bluestacks X is a new gaming platform that allows mobile games to run on the PC and a cloud-based online gaming platform that allows you to stream Android and iOS games designed for mobile devices directly on your browser. The cloud service was launched today currently it is the only gaming service in the market that allows for cloud streaming of mobile games completely free of cost. It is powered by a hybrid technology the company has said it has more than 200 compatible games in its library with adding more every week. 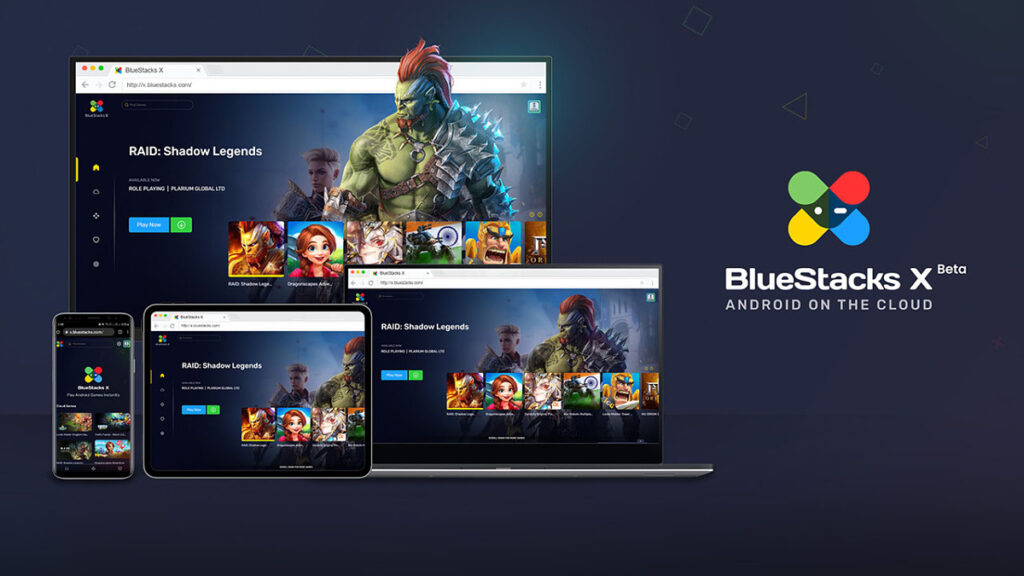 Thanks to the new Bluestacks X game streaming service, now available on phones, tablets, Chromebooks, Windows, Mac, and Linux computers as a web app, you can now stream games to any modern device from a web browser. Any device that has a browser can play BlueStacks games using Bluestacks X which also includes the devices like Rasberry Pi.

Bluestacks X Beta is the world’s first free game streaming service for all mobile games on all platforms and devices. BlueStacks X is a service that enables you to stream Android games directly from your browser to multiple devices such as iOS, macOS, Windows, and Linux.

Bluestacks X Beta is the world’s first cloud-gaming streaming service for mobile games, powered by hybrid cloud technology developed in partnership with NowGG and WIRED and Bluestacks Inc. is a sister company of Android PC gaming and the world’s leading mobile gaming platform. The platform has been around since 2009 and serves as an Android emulator for Windows. After being serving as an emulator for over 12 years, the company’s finally moving towards bringing android games as a cloud service and supporting all the major platforms.

BlueStacks, Inc., is considered a pioneer when it comes to android emulators for PC and the company is coming forward with the announcement of BueStacks X, the world’s first cloud-gaming service for mobile games. The company also announced the debut of the Bluestacks x beta version of the world’s first mobile video game service focused on the cloud, available on Windows 10 / 11, Mac, iOS / Android, Raspberry Pi (e), and Chromebook. The service launched in beta with around 200 games available for streaming, with the promise to add more titles soon. In the case of Bluestacks X, players have access to over 200 mobile games – a number that will only grow as more developers get to the platform. The library has a great collection of strategy and RPG games will different genres coming soon.

The beta version of a new cloud-based mobile streaming service called Bluestacks X uses a hybrid cloud model that was developed in partnership with the California gaming PC platform and its sister company NowGG, a Platform-as-a-Service (PaaS) cloud gaming site. BlueStacks X is a new gaming platform designed to run mobile games on PCs, but it is a promising new chapter in cloud gaming that could relieve some of the stress associated with the latest mobile titles.

The company says it will move some of its computing and graphics to the endpoint, reducing cloud costs and providing users with a free service without advertising support. The development company will also allow Discord users to integrate the cloud gaming service with their Discord server. Bluestack X will soon develop its own Discord Bot named Cloudy which will integrate with the user’s Discord server and will allow players to launch cloud-based android games with their friends.

The service has a limited number of games that can be streamed in the cloud. You will need a browser that supports Google native graphics rendering, and the games available to users are limited but are expected to increase once the beta is complete. While Bluestacks is free, the service itself has ad support, so you will see ads while playing. The service is only compatible with apps in the Google Play Store and Microsoft’s partner Amazon, meaning developers will have to tweak their apps and games, eliminating important integration with the Google Play service. 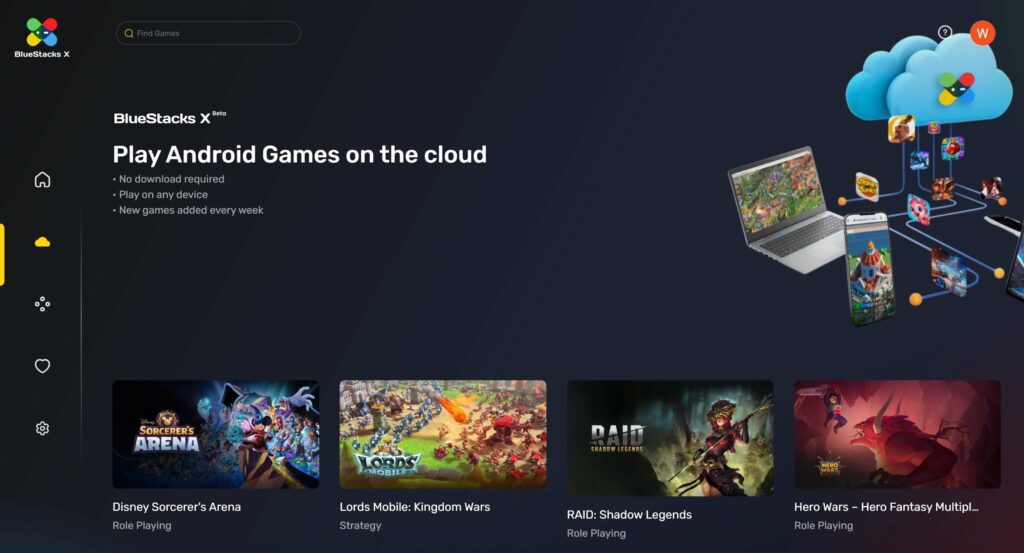 One of the advantages of cloud games on other platforms such as XCloud and Stadia is that the rendering and processing of the game is not carried out on the user’s device or server, but that the user has access to a streaming version of the game over the internet. Bluestacks X eases this somewhat like cloud gaming, but with a slight twist of history. The strategy behind BlueStacks Now. gg differs from the strategies of rivals such as Microsoft’s XCloud, Nvidia’s GeForce Now, Amazon’s Luna, and Google’s Stadia, which focus on taking over PC and console games and running them in the cloud so that they are available on all devices, including mobile ones. BlueStacks started with a focus on a client that gives you best performance and graphics for mobile games while giving you good control and access to a variety of tools to improve your experience.