BRACE YOURSELVES; REALME 8 SERIES IS READY TO LAUNCH!!

The market is all ready to witness the launch of Real me with its Real me 8 and 8 Pro on March 24 of this year. The company has its teaser video with infinity as a strong symbol which is technically 8 placed horizontally.

The launch was made through a video to make people ready for their upcoming products. The video was short but had a outline of care racing between the VP of Real me India, Madhav Seth and that of Europe. “We go live on March 24, stay tuned,” Madhav says to the consumers & competitors out there.

The highlighting features of 8 series are as follows:

The possible launch will be in India before Europe. This would be latest launch after Redmi Note 10 series which apparently is the clear competitor of the brand right now.

Dare to Leap is ready to take a big Leap 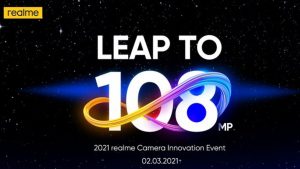 MORE ABOUT REAL ME

Real me is a Chinese company set up two years back in 2018 under the parent company of Oppo. Recently; the company has surpassed 10 million users with a solid shipping of 4.7 million units. It has now become the top 10 mobile manufacturers in the world.

The timing of the launch is quite strategic as it is immediately one day before the One Plus 9 series launch; which is an indirect effort to tap the market’s attention a little bit away from the limelight to some extent. The benefits are not to be distributed any way in this market. So; the first move is essential. The teaser is completely trending.

The Indian smartphone market has always presented an optimistic image all across the world. The pandemic brought a decline for all of them. So; a bounce back is must. That is possible only when you make the market flooded with your good & efficient products.

Therefore; Both Real me & One plus are set with their series to woo their respective customers. The studies have made it clear that Real me has shown the highest growth of 22% in 2020.

The quarter highlights of every year are very clear with the fact that there is a cut throat competition between the leading brands. That is prime most reason why the launch announcement has created buzz worldwide as it has a major aim to get into the markets with a bang.

Now the decision rests on the response the products recieves.

Infinity is unending ; let’s hope the same for the demand for Real me 8 series.