Brave is a new private and secure web browser for Mac, mobile, and PC. Recently, it was announced that its users will no longer need a dedicated app to keep track of their media queue.

Consumers of Brave will now prefer using the browser of their as an impromptu media player. The company stated that it will be launching an updated iOS browser that introduces a Playlist feature for placing any media – both audio and video – in an organised queue. In the situation that one would like to watch a series of cooking videos or binge a podcast, they simply have to long-press them in order to add them to a playlist. Then, the order of this playlist can be shuffled as many time as the user likes. 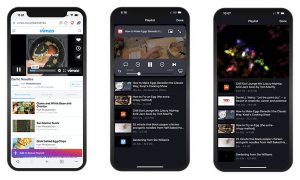 Brave downloads different forms of media by default, although users can instruct the browser to stream content if they would rather not use up an excessive amount of data on downloaded media. Additionally, downloads are kept anonymous. The browser takes advantage of the picture-in-picture feature of iOS 14 to keep the media playing actively in the background while users are on other applications.

However, if someone wants this Playlist feature on other platforms, they will have to wait. In an official statement, Brave said that this specific feature will not be available on Android or desktop browsers until the second half of this year. But if you are a regular user of the web, this might be worth the wait. This movie also highlights the company’s strategy of shifting its approach and services based on how consumer behaviour is changing. Brave will also be including video calling and other features where increased privacy will also be included.

Brave itself was developed by Brave Software, Inc. based on the Chromium web browser. It works by blocking advertisements and website trackers, and provides users with a way to transfer contributions through cryptocurrency in the form of Basic Attention Tokens (BAT) to websites and content creators, as well as the ability to keep the cryptocurrency that they earned. As of 2020, Brave is available for iOS, Android, Windows, Linux, and macOS.

The software of Brave is written in JavaScript, C++, C, and Rust, and operates on the Blink, V8, and WebKit engines. Brave uses its BAT feature to generate revenue. It has received at least $7 million in angel investments from venture capital businesses, such as Propel Venture Partners, Founders Fund, Foundation Capital, Pantera Capital, and the Digital Currency Group.