A lot of day to day technology that we use now was developed for the army. From Internet to Bluetooth most of the technology pieces that have become an integral part of our lives were used by the army first. Technology helps in digital warfare as well as physical one.

Few decades back, a country with the most soldiers and arms and ammunition used to have an upper hand at the war. The times have changed now, with the digitization of most of the processes, the wars too have shifted online. A country with the most high tech system and a web of deadly hackers certainly gets a massive advantage.

Technology never suffered a setback when it comes to innovation and creativity. One after the other, we are constantly amazed by how technology blurred the lines between fiction and reality.

The British Royal Navy is now testing a futuristic jet suit which will allow them to keep an eye on any possible chances of high seas piracy and combat it. The commandos will be able to conduct raids with the help of these high tech futuristic jet packs.

Videos have surfaced showing the British Royal Navy marines defying gravity with these jet packs. They are seen flying around on the ocean, quite like a superhero, and board a ship moving at a distance. 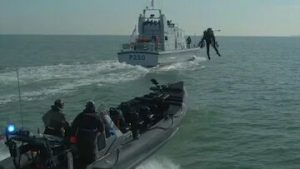 The name of the firm that built the suits is Gravity Industries. It is a UK based firm and was the one which uploaded the videos on an online platform. While looking at the video one can clearly make out that such technology seems more of something straight out of a Marvel movie.

In the video, one can see a British Royal Marine taking off from an inflatable high speed boat with the help of the jetpack suit. The marine is able to fly over the sea and after a while lands on the deck of HMS Tamara which is the navy’s offshore patrol ship. One can also notice that the marine had a cylindrical pair tied to both his hands and machine on his pack which looks like a backpack.

With the help of this jetpack, the British Royal Navy marines imitated a ‘visit, board, search and seizure’ operation. This is considered as one of the most dangerous and difficult missions for the marines. Without the jetpack, marines were left with only one choice, to use a helicopter and drop down on the ship. This process takes a lot of time and can alert those on board.

According to Admiral Tony Radakin who is the highest ranking British navy officer, this suit is the “latest game-changing kit”. The video that was tweeted by him has gathered more than 548,000 views online.

As per the press release by Gravity Industries, 42 Commando Royal Marines had participated in this exercise. It lasted for a span of three days. In this exercise the marines explored different ways to board the ship compared to traditional boarding which was followed so far. The British military has also specified that they have not yet decided whether or not they will buy this technology.

The jet suit is still in its development process. It will be interesting to see how the military incorporates this piece of technology in its daily operations and whether it has other interesting uses too.