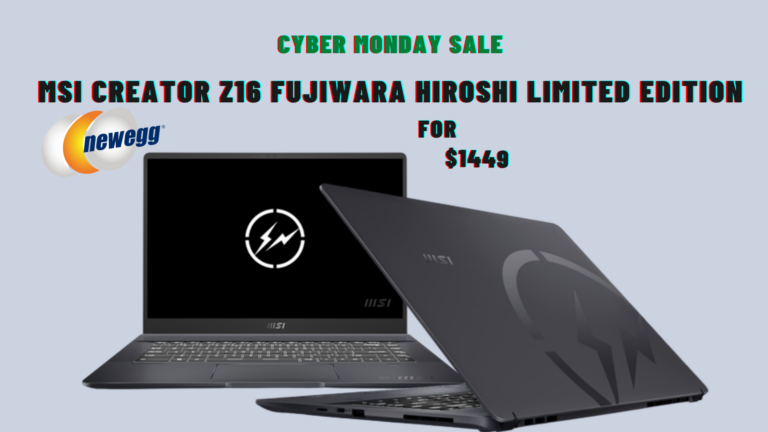 If you’ve been seeking to get a new gaming laptop for the holiday season, this might be your only chance to do so.

We had a week-long Black Friday Sale where we saw a variety of things ranging from smartphones to laptops to pricey gaming consoles, 4K TVs, and more.

If you missed any of the bargains during that period, we have another opportunity for you to get your hands on a new gaming laptop. In reality, you may obtain a limited-edition laptop at a significant discount.

After putting the gaming laptop onto the market, the laptop received an overwhelmingly enthusiastic reception, particularly from the Japanese public. Because this was a limited edition laptop, the cost was likewise set at a premium level.

However, thanks to the Cyber Monday Sale, fans can now obtain this MSI Creator for as much as a $1000 discount. If you’re enthusiastic about this laptop, we’ve got you covered with all you need to know:

Before we get into the final discount pricing, let’s have a look at the MSI Creator Z16 Fujiwara Hiroshi Limited Edition laptop’s specifications. This laptop was designed to give its customers excellent gaming capabilities. When you open this laptop, you will see a larger screen extended across a 16-inch MIniLED Panel on the front side.

This display also supports a max resolution of QHD+, HDR 1000, and a faster refresh rate of up to 165Hz. When it comes to the internals of this laptop, it has the top-tier Intel chipset, the 11th generation Intel Core i9 SoC. This chipset also has a peak frequency of 2.30GHz.

In addition, this speedier chipset is paired with a powerful GPU onboard, the new 6GB DDR6 NVIDIA GeForce RTX 3060 visual card. So, when it comes to power, you have all you need. This speedier processor and GPU have been paired with quicker RAM and storage, with 16GB of peak RAM and 1TB of faster PCIe SSD storage.

In terms of additional features, this laptop includes a specialized RGB Backlight keyboard as well as a wide selection of connection options such as Wi-Fi 6E and Bluetooth 5.2. You may also get this laptop with Windows 10, and you will be able to upgrade to Windows 11 for free.

If you’ve decided to get the new MSI Creator Z16 Fujiwara Hiroshi Limited Edition, then from the actual pricing which is $2699 now you can get it as low as $1699 and again Newegg has added an extra $250 rebate which brings the pricing even down to $1449.