CBI books DHFL in ‘biggest’ banking fraud of Rs 34,615 crore The agency, sources said, is conducting searches at 11 locations across the country at premises associated with the accused. 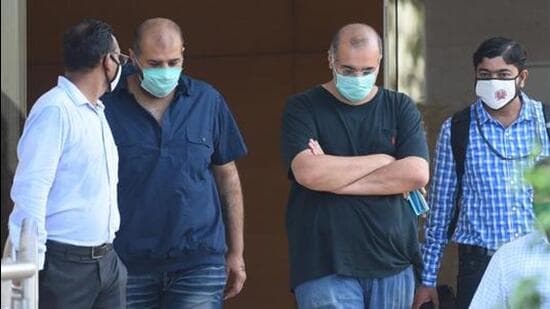 The CBI has booked Dewan Housing Finance Ltd, its former CMD Kapil Wadhawan, director Dheeraj Wadhawan, and others for bank fraud of Rs 34,615 crore, making it the biggest such case probed by the agency, officials said Wednesday.

Following the registration of the case on June 20, a team of over 50 officials from the agency Wednesday carried out coordinated searches on 12 premises in Mumbai belonging to the FIR-listed accused which also include Sudhakar Shetty of Amaryllis Realtors and eight other builders.

The action came on a complaint from the Union Bank of India (UBI), the leader of the 17-member lender consortium which had extended credit facilities to the tune of Rs 42,871 crore between 2010 and 2018.

The bank has alleged that Kapil and Dheeraj Wadhawan in criminal conspiracy with others misrepresented and concealed facts, and committed a criminal breach of trust. They abused public funds to cheat the consortium to the tune of Rs 34,614 crore by defaulting on loan repayments from May 2019 onwards.

The Wadhawans’ office and residence were among the places raided after the First Information Report (FIR)registration against them on Monday.

In the FIR filed, the agency said the promoters of DHFL allegedly conspired with others, including public servants, and induced the banks to sanction and disburse loans worth ₹42,871 crores between 2010 and 2018. One Sudhakar Shetty and 10 companies have also been named.

The FIR said the Wadhawan brothers diverted the funds to entities they controlled by sanctioning loans to them without due diligence or obtaining adequate securities through falsification of books of accounts, causing a loss of ₹34,614.88 crores to the consortium.

The case has been registered on a complaint from the Union Bank of India, which led the consortium. According to the First Information Report, a group of 29 lenders formed in July 2010 initially extended credit facilities to the company. In July 2020, there were 17 consortium members and the quantum of credit facilities was ₹42,871.42 crore.

This aside, the banks had subscribed to the DHFL’s non-convertible debentures in 2016-18. The company defaulted on its debt payment obligations from May 2019 onwards.

Well before that, several non-banking finance companies were facing problems in fund-raising after the IL&FS Group entities defaulted on their commitments. A sharp correction followed itn in the DHFL share price.

The concerned lenders enquired about its financial health and were told that it was due to the sale of commercial papers by an investor.

Then, in January 2019, media reports alleged fraud via diversion, round-tripping, and siphoning of funds. Subsequently, the lenders decided to closely monitor the company’s affairs and appointed an auditor to examine transactions from April 2015 to December 2018.

Based on the early warning signals, the Union Bank of India classified the loan as a Red Flagged Account in October 2019 and a lookout circular was issued against the Wadhawans.

Meanwhile, proceedings initiated in the National Company Law Tribunal, Mumbai, under the Insolvency & Bankruptcy Code, resulted in the approval of a resolution in June 2021.

Since then, the lenders have been able to recover ₹5,977.93 crore and fresh non-convertible debentures of ₹7,186.74 crores.