Charge your Tesla while taking your order at McDonalds in California

McDonald’s located in Firebaugh, California had Tesla charging points where you can take your order while the car is being charged. The Tesla charging station located close to the franchise is the biggest station in the United States. It is unclear for now if Mcdonald’s is benefiting from this or Tesla Supercharging stations. But the location has become a very popular and ideal location for customers to charge their cars. 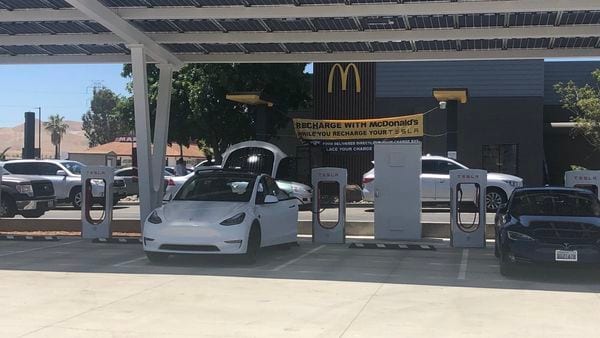 McDonald’s may not be the best option for many, but it is quick and a couple of fries along the way sounds good compared to other charging stations. Usually, customers need to sit down and relax in the location of the charging station. This Mcdonald’s located near charging stations seems to take that to its advantage. Because it is not an official alliance or partnership between Tesla and McDonalds. Yet there is a display encouraging Tesla charging customers to go and visit their franchise.

The fast-food franchise has 13,443 locations in the United States. Only the one in Firebaugh has this kind of strategy to attract customers. Another likely reason for the display could be that often customers wonder if there is any place to eat nearby. Having a sign helps them to have a quick bite without needed to search for a place themselves.

McDonalds really capitalizing off the Firebaugh Supercharger from teslamotors

Some comments under the post which identified the location say that they didn’t deliver food. While the ones who got to know about this with this post seem to be surprised, but others who experienced the charging station liked the idea of having a Mcdonald’s. It could be time for Tesla and the fast-food franchise to team up and work on having more charging stations accordingly.

Luckily the Tesla charging time is less, and customers can actually choose between going for a quick bite or wait for a couple of minutes. As this is only the case with one location it may not seem much. But if it is noted that both businesses benefit from this, it could be an interesting idea. On the other hand, Tesla already has its own restaurant plans. They applied for the restaurant patent which allows them to have takeaways or similar food delivery places at their charging station. Elon Musk’s SpaceX already has many restaurants in Boca Chica, but it is available only for the SpaceX community. An alliance with another food franchise doesn’t seem like a bad idea in popular locations for charging Tesla cars.