Tencent shuts NFT market place, as the regulatory bodies from the government grab NFT by its neck

NFT (Non-Fungible Tokens) started gaining popularity and as covid struck, the investors got an opportunity to learn more about the digital asset industry. NFT was on of the peculiar digital assets that was successful to grab the attention a lot of people, surely creating a huge movement.

Following the movement, Tencent, went ahead to launch an NFT market place of its own called “Huanhe” in 2021. As the market place came into existence, the investors across the globe and the Chinese investors got a chance to engage in the trading of NFT. 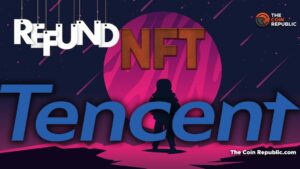 As Chinese government shifted its focus from cryptocurrencies to NFT, many NFT industries started shutting down their operations as the industry was critically scrutinized. In one such case, Tencent also went on to shut its NFT market space only after a year of its launch. Reportedly, Chinese government went on to ban the trading of NFTs in the country, influencing and also pressurizing the companies to shut their NFT services.

Chinese government, from the beginning of the revolution of digital asset industry, has always stood against it. Earlier, Chinese government banned cryptocurrencies, not allowing the digital asset to penetrate into the market. The same was met by NFT, as NFTs were also banned and the investors were left in dismay.

NFT as a digital asset has come a long way in terms of market capitalization. But, even though there has been growth for the industry, it has short lived. The market crash of cryptocurrencies that happened in May, also went on to drown the NFT market space, making it a struggle for the industry to revive back.

Even amidst such a situation, the declined interest has not seemed to deter new projects. It was reported that, the NFT collections are increasing and are reportedly inching towards the magical figure of 150K.