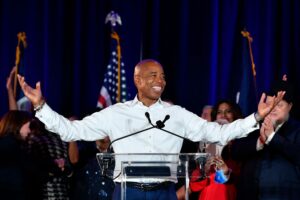 The election of Adams, a Bitcoin enthusiast who has promised to convert New York City into a crypto hub, Wu said, played “a huge influence” in his decision to open a permanent office in November.

“Knowing that we have a sympathetic government, especially in the New York City area, will be very helpful,” said Wu, the company’s president.

Adams, who was sworn in earlier this month, has a lot of work ahead of him to make New York as friendly as other potential crypto centers. The state of New York has strict restrictions for cryptocurrency businesses, including an expensive registration requirement, and the state attorney general is coming down on some of them.

Nonetheless, Wu and other cryptocurrency executives believe that the mayor’s welcoming attitude will attract digital asset start-ups looking to establish their legitimacy alongside traditional Wall Street firms and leverage the financial hub’s huge talent pool and investor base.

Chainalysis, a Bitcoin data platform, has also committed to New York City in 2021, signing a deal for a Manhattan office space that can house up to 200 employees in August.

“The incoming mayor’s support for the industry confirms my belief that New York is the greatest location for Chainalysis’s headquarters,” Michael Gronager, CEO and co-founder of Chainalysis, said in a statement to Reuters. “For our next phase of growth, we plan to tap into the city’s deep talent pool,” he added.

Many nations want a piece of the action as the digital asset market grows and the value of cryptocurrencies rises – reaching $3 trillion in November.

Adams expressed interest in building a digital wallet for city employees and users of public benefits during his campaign. Following his victory, he promised to collect his first three paychecks in bitcoin and urged that cryptocurrencies and blockchain technologies be taught in New York schools.

“The Bitcoin industry will be centered in New York… In November, he tweeted, “Just wait!”

Unlike other cities like Miami and Austin, Adams has yet to offer specific legislation that would encourage crypto entrepreneurs to set up shop in New York, despite their marketing highlighting low energy costs and favorable tax rates.

The mayor’s office did not respond to a request for comment, but Adams has stated that his pro-crypto attitude will draw more tech talent to the city, which many executives believe will happen.

“I think it’s a very good signaling tool to… say, ‘Okay, we acknowledge that this business can benefit everyone,'” said Zach Dexter, CEO of FTX U.S. Derivatives, a Miami-based crypto derivatives exchange.

It’s unclear if Adams will be able to work from City Hall to reshape state restrictions that the virtual currency industry has criticized as being too strict and costly.

“He can be a cheerleader,” said Murphy & McGonigle attorney Stephen Gannon. “However, the state is mostly responsible for the regulatory environment.”

New York Attorney General Letitia James has shut down crypto lending companies, stating that they must register with her office in the same way that other lending platforms that operate in the state or market products to New Yorkers must.

Most digital currency-related businesses must additionally get a “BitLicense” and adhere to know-your-customer, anti-money laundering, and capital standards in New York. Only 20 licenses have been granted by the New York Department of Financial Services (NYDFS), which did not reply to a request for comment.

Given the sector’s rapid expansion, crypto executives believe there is an opportunity for more than one city to emerge as a crypto destination. Dexter said that New York has already been successful in attracting tech expertise from Silicon Valley, which may help Adams gain an advantage.

“There’s this chance to have a few crypto capitals,” Dexter explained. “I believe he will have some success.”

Also read: Everything You Need to Know About PolySwarm Cryptocurrency