Since the market crash has occurred, the investors, the institutions, the crypto exchanges, all of them were at distress to say the least. The loss of billions of dollars surely made a big dent in the trust of investors in cryptocurrency. The bearish crypto market, doesn’t seem to be halting as many people suggest that the market is entering into a deadly phase called “Crypto Winter.”

In the contrary, the market crash did not only have the negative impact. Reportedly, the fall in the prices of cryptocurrencies also resulted in the deficiency of funds for North Korea to fund their nuclear missile programs.

More than just exchanges and eager investors who were confident about the development of digital assets have been impacted by the continuing crypto winter. In other places, the sudden decline in the value of the most popular cryptocurrencies had an unexpectedly good result: it eliminated a sizable portion of the stolen money that North Korea had been utilizing for its nuclear missile program,

In 2018, a Singapore based US citizen tipped North Korea about the use of cryptocurrencies to work around US Sanctions. He was also a member of Ethereum network and had an in-depth idea about the ways to use cryptocurrencies. The same person is now looking at an imprisonment for no less than 5 years.

North Korean Missile program funded by crypto down in drain. 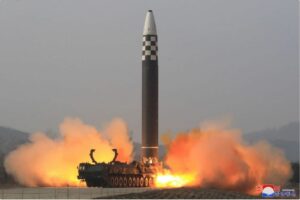 According to the report from UN, the country relied heavily on stolen digital tokens to fund its nuclear weapon development and testing activities, so much that, a market crash which is prevailing in the market has made sure that the program has gone down the drain.

The old North Korean crypto holdings that Chainalysis, a blockchain analytics company, has been tracking, are now estimated to be worth $65 million, a significant decline from $170 million in just six months, according to Reuters this week. The money was gathered from at least 49 state-sponsored cyberattacks that took place between 2017 and 2021, and it is likely that only a small portion of the overall money that has not yet been laundered is represented by the funds.

It is true that, the market crash caused a lot of distress among the investors across the globe. But, the matter of fact that the market crash failed the nuclear program of North Korea is a positive news to hear, as the use of nuclear weapon has the capacity to wipe out the entire population.