Customer From Mumbai Gets Luck, Receives Smart Phone Instead Of Mouth Wash. 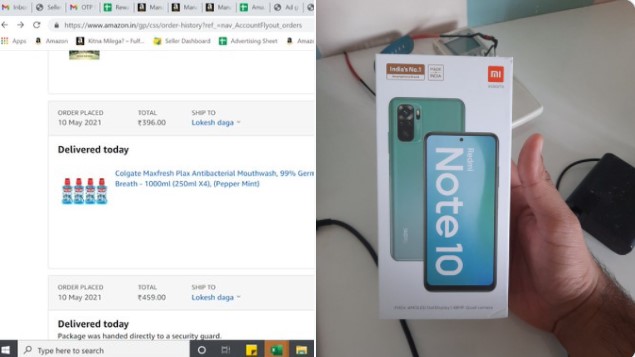 Amazon’s goof up where it delivered wrong package of a smart phone instead of mouth wash.

When you are running a big company like Amazon which is a big online store that sells every possible thing, goof-ups happen all the time. Especially in largely populated countries like India where there are over a 100 million registered users, taking place of the mistakes are very often. Packages are sent on the wrong addresses all the time. Parcels getting exchanged is also very common.

One such case was recently found in Mumbai when Lokesh Daga was by mistake sent a wrong package of the product he did not order.

In this case, Lokesh ended up receiving a Redmi Note 10 smart phone instead of the mouth wash that he had ordered via Amazon India.

Being an honest man, Lokesh tried to put a request to return the package to its rightful owner and get his mouth wash. However, as the mouth wash for which he had placed an order was non-returnable or replaceable.

Lokesh had to then take this issue up to Twitter. He tagged both the companies- Amazon India as well as the smart phone company Redmi.

He tweeted mentioning the details about the package and the goof-up.

The package that he received had his address, even the packaging label containing the barcode was his, however the invoice was not of his. He put in a lot of efforts to send back the package to its rightful owner.

In his tweet, Lokesh said- “Hello, @amazonIN ordered a Colgate mouth wash via ORDER # 406-9391383-4717957 and instead of that got a @RedmiIndia note 10. Since mouth was in a consumable product returns are restricted and am unable to request a return via the app.”

Lokesh attached a picture of the order and the received package along with the tweet.

After tweeting about this, Lokesh posted a follow up tweet to help Amazon contact the real owner of the smart phone. He tweeted- “I have emailed you as well to get the product delivered to the right person.”

This was not the first time that the company had made a big goof up with the customer’s orders and received what they did not order.

Just a year ago, a similar situation took place. Last year a man from Pune had ordered just a bottle lotion which was worth ₹300, instead he received a pair of expensive wireless headphones which valued at ₹19,000/-. This came as a shock to him when he tries returning the product. However, the product was not returnable, so the company told him to keep the product.